by Mihai Andrei
in Eco tips, News
Reading Time: 2 mins read
A A
Share on FacebookShare on TwitterSubmit to Reddit

How important are details, when it comes to saving money? Any accountant will tell you: really important. A middle school student in Pittsburg thought the same thing – he discovered that the government could save $400 million dollars just by change the typeface it uses. Inspired by a school project on saving ink, he calculated that his school could reduce ink use by a quarter simply by changing their typeface from Times New Roman to Garamond. 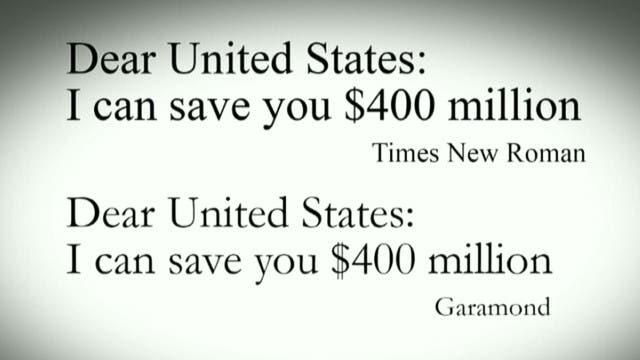 If his school could reduce ink use by 25% by dropping TNR, then so could every other school, right? The figure might vary a little, but that seems like a safe assumption. Apply that to the government, and you really start seeing the impact: this could slash its ink usage by a similar margin and save $400 million! Now we’re getting somewhere!

“Ink is two times more expensive than French perfume by volume,” Suvir says with a chuckle.

He’s right – Chanel No. 5 perfume costs $38 per ounce, while the equivalent amount of Hewlett-Packard printer ink can cost up to $75. So he decided to set out how ink could be saved; his methodology was simple, but to the point (I’m trying really hard to avoid puns, but alas, sometimes I fail). First, he charted how often each character was used in four different typefaces: Garamond, Times New Roman, Century Gothic and Comic Sans. Then, using a simple commercial software (APFill® Ink Coverage Software) he measured how much ink each font would require. To verify these findings, he printed enlarged versions of letters and weighed them – the results were consistent. Garamond, with its thinner strokes, reduces ink consumption by about 24%.

If his school would switch from TNR to Garamond, they would save $21.000 annually. If the entire government, which prints a huge amount of documents each day also did it, they would save $136 million on ink, and if state and local governments got in on the change, the entire country could save another $234 million. That adds up to $400 million in the US alone!

Of course, Suvir was not the first ever to suggest using a different typeface – several Universities are already using thinner fonts in their emails and documents for this specific purpose. But one can only wonder – if a sixth grader saw a simple way to save this much money and resources… why aren’t policymakers all over it already ? It’s as easy as changing fonts.