by Tibi Puiu
in Environment, Green Living, Nutrition
Reading Time: 3 mins read
A A
Share on FacebookShare on TwitterSubmit to Reddit 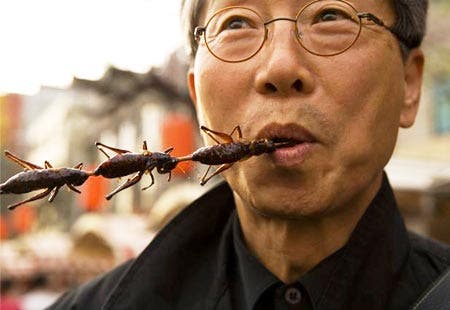 With the world’s population hitting the magic seven billion a mere few years ago, new solutions are required to feed the growing number of hungry people, estimated at being almost one billion strong at the moment or one in every seven people being hungry, according to the World Hunger Education Service. A panel of experts advise for an alternate source of food: insects. According to the recently released UN report boasts insects as a fantastic food source, being nutritious, environmental friendly and with a much greater production output potential than conventional food derived from animals or crops.

Currently, an estimated two billion people in the world already consume insects as part of their diet or as supplements, mostly in Africa and Asia. Insects can also be rich in copper, iron, magnesium, manganese, phosphorus, selenium and zinc, and are a source of fiber, and are as abundant as they are nutritious.

“Insects are everywhere and they reproduce quickly,” the agency said, adding they leave a “low environmental footprint.”

The 200-page UN report discusses a slew of reason supporting massive adoption of insects as a food source. A strong point is being made regarding efficiency, as insects have a good input to output ratio in converting feedstock into meat. On average, they can convert 2 kilograms (4.4 pounds) of feed into 1 kilogram (2.2 pounds) of insect mass. In comparison, cattle require 8 kilograms (17.6 pounds) of feed to produce a kilo of meat.

Insects are also less harmful to the environment, obviously since they’re first off part of the cycle seeing how they feed on human and food waste, compost and animal slurry, with the products being used for agricultural feed. Insect farming, however, isn’t widespread  and in countries where insects are part of the daily diet, they’re mostly collected from forests or farmed in small, family-run establishments for niche markets.

The report argues that if a massive insect farming initiative is put in place, many of today’s food and feed insecurities might be addressed. The most prized edible insects, according to the researchers involved in the report, are certain beetles, ants, crickets and grasshoppers, as these  come close to lean red meat or broiled fish in terms of protein per gram (ounce).

“The main message is really: ‘Eat insects’”, Eva Mueller, director of forest economics at the FAO, told a press conference in Rome.

“Insects are abundant and they are a valuable source of protein and minerals,” she said.

“Two billion people – a third of the world’s population – are already eating insects because they are delicious and nutritious,” she said.

Basically, the UN report offers the world all the right reasons  to put aside chicken and other meats in favor of crunchy insects. There is one serious impediment, as the report is quick to point out: taste or rather a skewed perception in the western world. Certain insects are actually considered delicacies in some countries in the world.

Speaking at the press conference was Gabon Forestry Minister Gabriel Tchango who said: “Insect consumption is part of our daily life.”

“Insects contribute about 10 percent of animal protein consumed by the population,” he said.

For insects to become introduced in western diets as well, a slow building campaign is required. Awareness on the subject first needs to be considered, if barriers are to be raised.

The report concluded: “History has shown that dietary patterns can change quickly, particularly in a globalised world. The rapid acceptance of raw fish in the form of sushi is a good example.”