A new source of methane, a gas which is many times more destructive for the environment than CO2 has been identified by scientists over vast areas of the Arctic, especially over the areas where the sea has melted. 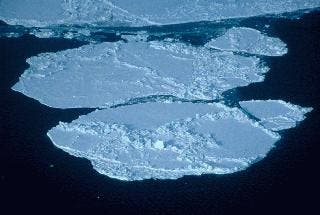 Researchers found massive amounts of methane being released in the atmosphere from the ocean through cracks in the ice. Eric Kort of Nasa’s Jet Propulsion Laboratory in Pasadena, California, said that he and his colleagues were surprised to see methane levels rise so dramatically each time their research aircraft flew over cracks in the sea ice.

“When we flew over completely solid sea ice, we didn’t see anything in terms of methane. But when we flew over areas were the sea ice had melted, or where there were cracks in the ice, we saw the methane levels increase,” Dr Kort said. “We were surprised to see these enhanced methane levels at these high latitudes. Our observations really point to the ocean surface as the source, which was not what we had expected,” he said.

When it comes to trapping heat, methane is 70 times more potent than carbon dioxide, but it is broken down more quickly in the atmosphere – some 20 times more quickly. Still, the news are quite worrying.

“We suggest that the surface waters of the Arctic Ocean represent a potentially important source of methane, which could prove sensitive to changes in sea ice cover,” the researchers write. “The association with sea ice makes this methane source likely to be sensitive to changing Arctic ice cover and dynamics, providing an unrecognised feedback process in the global atmosphere-climate system,” they say.