Will geoengineering save us from climate change? Not if we don’t care enough to research it, COP22 panel says

We could cool down the planet starting tomorrow if we wanted to, but we don't know what would happen next.

by Tibi Puiu
in Climate, News
Reading Time: 7 mins read
A A
Share on FacebookShare on TwitterSubmit to Reddit 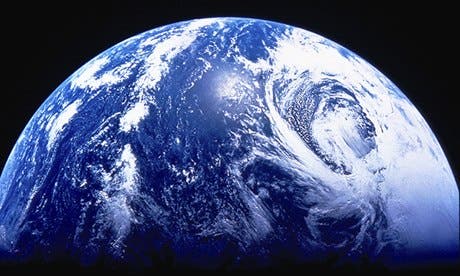 Every year, we’re generating around 40 billion tonnes of carbon dioxide by burning fossil fuels. That’s an equivalent figure, because it also takes into account other greenhouse gases like methane, nitrous oxide, water vapour and so on. The bottom line is that we’re exceeding our allowed budgets at an alarming rate and the Paris Agreement stated goal of reducing global warming to no more of 2 degrees C past Industrial Age levels seems too hopefully optimistic. The world is already 1.2 degrees C locked-in according to the most recent reports. With this in mind, many scientists are looking to unconventional methods of offsetting the carbon we’ve spewed into the atmosphere, so-called geoengineering methods.

“We’re flat out on the business as usual trajectory and a two degrees warming is very optimistic,” said Dr. Hugh Hunt, a professor at the Department of Engineering, Trinity College, Cambridge University, during a Climate Matters panel at the COP22 event held in Marrakech, Morocco.

Joining Hunt were Stuart Scott from the Climate Matters show and Dr. Peter Wadhams, Emeritus Professor of Ocean Physics, also from Cambridge University, UK. The panel argued that giving our rising appetite for energy and the copious amount of greenhouse gases released in the atmosphere as a result of meeting this demand, the world urgently needs geoengineering solutions that might capture 10 billion tonnes of this carbon per year. That’s a quarter of what we’re currently burning and it’s perhaps not enough, but “that’s the very least we have to do,” said Hunt.

Geoengineering technology — will it save us?

Perhaps the most commonly available geoengineering method at our disposal is simply to plant more trees, preferably to replace those we’ve cut down but also planting new forests where none where to be found to begin with. After these trees die, however, it’s important we dispose of the carbon they sucked over their lifetimes. One solution is to transform the trees into biochar — turning trees into charcoal essentially — then burying it somewhere.

Looking upwards, scientists are also exploring ways to make the atmosphere more ‘milky white’, essentially increasing the amount of radiation that’s reflected back into space. This rather aggressive form of geoengineering involves literally whitening clouds to manage radiation forcing. With this in mind, fine particles would be scattered into the stratosphere, the second major layer of the Earth’s atmosphere. Some of these compounds can be aerosols like sulfur-based compounds, which the public often finds very undesirable. But, Prof. Wadhams says we can just as well help clouds become whiter by injecting benign water vapour particles right up the level of the stratocloud, the lowest level at which clouds form. As a result, the finely divided water particles form salt crystals that stay suspended and gray clouds become whiter.

To deliver the salty water vapour into the atmosphere, Wadhams proposes using computer-controlled unmanned ships that go around the ocean driven by the wind and inject water particles into the cloud. This already happens naturally as seen above.

“Rather than doing this accidentally, we want to do it intentionally and inject the right kind of particles into the clouds to make them whiter,” Wadhams said.

An alternative is the SPICE Project, which stands for stratospheric particle injection for climate engineering. This project aims to offset the effects of greenhouse gas increases by causing the Earth to absorb less radiation from the Sun. Inspired by the natural behaviour of volcanoes whose eruptions inject aerosols that can significantly cool the planet for years, like the 1991 eruption of Mount Pinatubo, SPICE aims to do much of the same by using the right, safe kind of particles. Hunt says one proposed delivery method for such aerosols involves lifting a helium balloon up 20 kilometers into the atmosphere. Tethered to the balloon is a 20 kilometers pipe, not a string, which is strong and able to carry fluid. 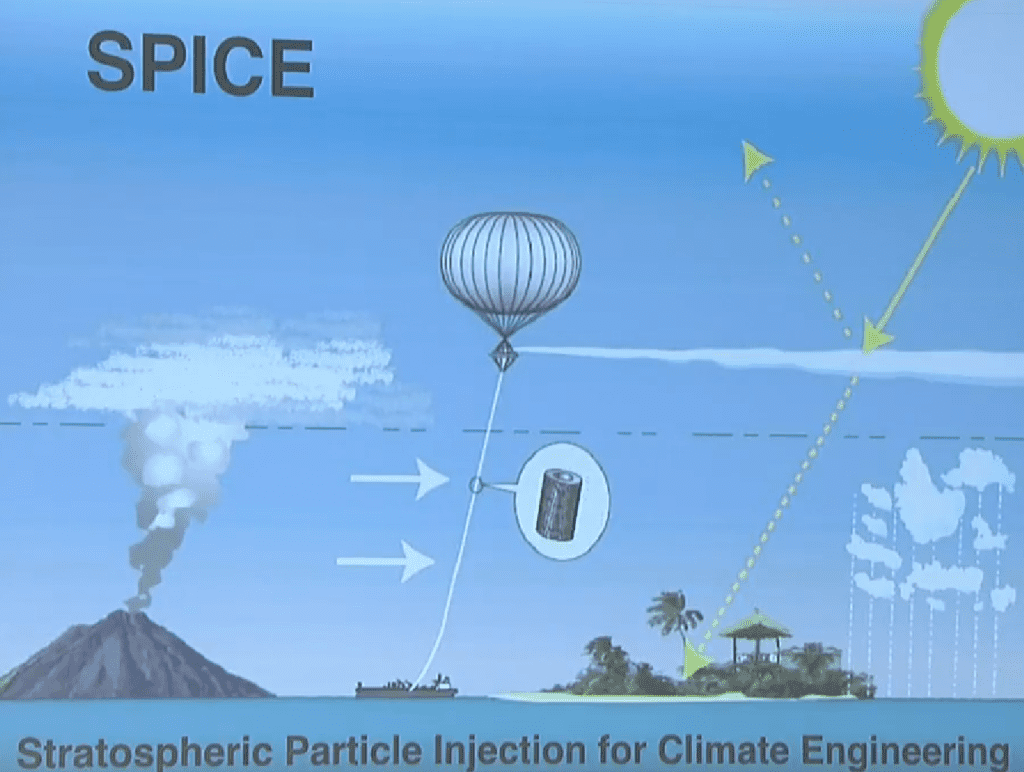 Such engineering methods are non-trivial and could take 20 years to mature. During the same time, the Arctic might be completely out of ice, the scientists from the panel warn. The biggest concern is that methane, a greenhouse gas that’s 80 times more potent than CO2, might bubble out of the arctic. Perhaps 50 Gigatonnes of methane currently trapped under the continental shelf of the Arctic could be released into the atmosphere as a result of the melting of protective permafrost skin.

One solution is to bring back Artic sea because permafrost melting is a result of warm water on the shelves during the summer. If you could bring back sea ice you could avert a potential catastrophe but this involves first and foremost cooling the atmosphere, so we’re back to where we started.

It’s worth noting at this point that while scientists use CO2 as a yardstick to equate all forms of greenhouse gases, the gas only makes 1/3 of all global warming chemicals. Methane, nitrous oxide and CFCs make up the rest.

This brings us to carbon sequestration and storage from the atmosphere, but also the SPRING project — a solar catalytic method for removing greenhouse gases which uses  “solar updraft towers“. This is a novel type of renewable energy power plant (with no-CO2 emissions) that involves massive air flows through a concentrated tower to generate power. Because such a large quantity of air passes through each tower, it is possible to contact and remove the GHGs in this air stream with a much greater efficiency.

Extracting 10 billion tonnes of carbon each year, or one cubic kilometer every second, from the atmosphere is a mammoth task in itself, but that’s only half the picture. Where do you put it afterwards? One good place you can use to bury all that carbon is the coal mines where the carbon was extracted from in the first place. However, the CO2 and methane needs to be liquified beforehand, compressing their volumes thousands of times, otherwise you’ll never have enough room. Other places scientists are exploring sequestration is sedimentary rock underneath the ocean or continental crust.

If all of this sounds overly ambitious, you’re not wrong — but scientists need to start from somewhere. For this to happen, researchers have to be allowed to do their jobs.

“Geoengineering is a dirty word in many environmental circles. We have to get out of this contrail conspiracy circle and let researchers do their work,” Hunt said.

“We must not be sidetracked in thinking we have to get approval because we don’t have the time.”

“Back in WWII, the urgency of winning the war against Hitler was such that things were done, like the Normandy landing, without thinking too much whether people agreed.  Sometimes the urgency is such that we need to do the research, and fast,” Hunt added.

To say geoengineering — from dumping iron filings in the ocean to spraying artificial clouds — is controversial can only be described as an understatement. It doesn’t help that the technology is in its infancy and the long-term effects of geoengineering are poorly understood, simply because we’ve never undertaken something of this scale. Hunt and Wadhams, however, stress that this is the reason why we have to get heavily involved with geoengineering. Twenty, thirty years from now the world might desperately need such measures and it would be very wise of us to have the necessary mechanisms and technology in place.

We could start geoengineering the planet tomorrow if we wanted to. One obvious solution would involve spraying aerosols from aircraft. That’s very easy. What we lack, however, is a complete picture of the consequences of such actions.

“It took us centuries to make the coal and steel industries to where they are today. We don’t have that much time,” Wadhams said.

“Generally the technology was well received by the public,” Hunt said speaking of public engagement programs run by his lab. “But the media didn’t see it that way. As a result of fairly adverse coverage, we were not allowed to do our experiments. Now, if we’re not allowed to do experiments then how will we ever going to develop technology, which if one day turns out to be necessary, works as intended?”

“I’m not pro-geoengineering at all — I’m pro-research. I am hoping geoengineering may never be needed, but I’m worried by the melting of the arctic. If the arctic does disappear I think we’re in deep trouble,” Hunt added.