A report released by the Institute for Energy Economics and Financial Analysis (IEEFA) found we are beyond the peak of coal consumption and demand. Effectively, the demand for coal has virtually dropped all over the world with few exceptions, most notably India. The news suggests we're well on our way to leave coal behind for good, and never turn back. Replacing coal are more efficient and energy friendly measures,including renewable energy, nuclear and gas.

A report released by the Institute for Energy Economics and Financial Analysis (IEEFA) found we are beyond the peak of coal consumption and demand. Effectively, the demand for coal has virtually dropped all over the world with few exceptions, most notably India. The news suggests we’re well on our way to leave coal behind for good, and never turn back. Replacing coal are more efficient and environmentally friendly measures, including renewable energy, nuclear and gas. 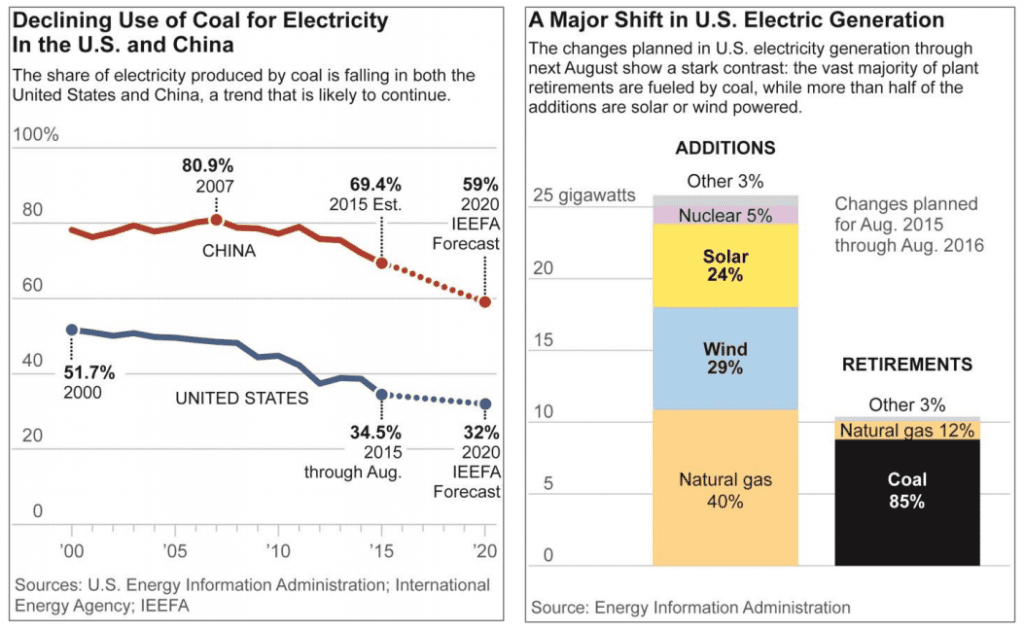 Coal has been getting fatter and fatter over the past decade, driven by huge demand in China and India. China burns half of the world’s coal and has been responsible for well over half of total CO2 emission growth globally for the past 10 years. But even here, things have had to slow down, given that pollution is a major concern in China. Now, coal demand has not only peaked – it’s trending down on a global level.

Highlights from the report, titled “Carpe Dieam: Eight Signs That Now is the Time to Invest in the Global Energy Market Transformation”:

● Coal’s Share of Electricity Generation in Key Countries is Declining. IEEFA sees it happening much more quickly than many analysts. 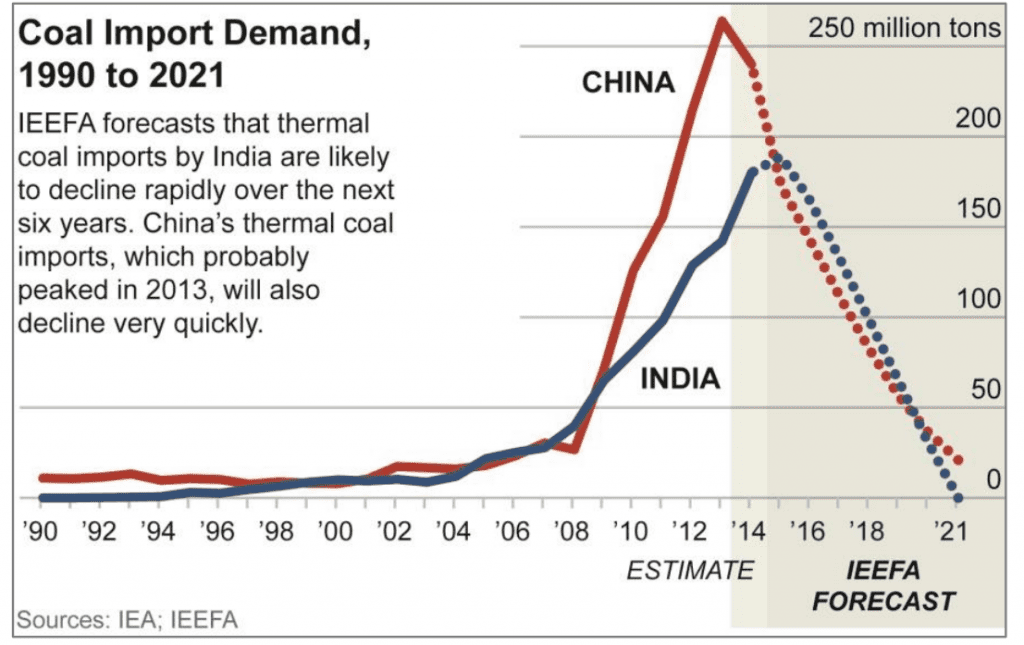 ● Demand for Seaborne Thermal Coal Is Declining, and Prices Have Collapsed. IEEFA sees internationally traded coal markets as having likely peaked in 2014 at an estimated 1,113 metric tons. They forecast a further 30 percent decline by 2021, to 762 metric tons. Their outlook is based on the likelihood that China, Western Europe and Japan have already passed peak import demand—all in in 2013-2014—and that India’s demand for thermal coal imports peaked in mid-2015.
● The Price of Renewable Energy is Declining. Technology innovation and economies of scale are working together to drive down the capital cost of renewable energy deployments. The cost of solar continues to decline at a double-digit rate annually, and solar is rapidly moving toward grid parity in an increasing number of markets. Rapid cost reductions in battery technology will compound the rate of deployment of distributed-energy solutions, further undermining the commercial returns of existing fossil-fuel assets. 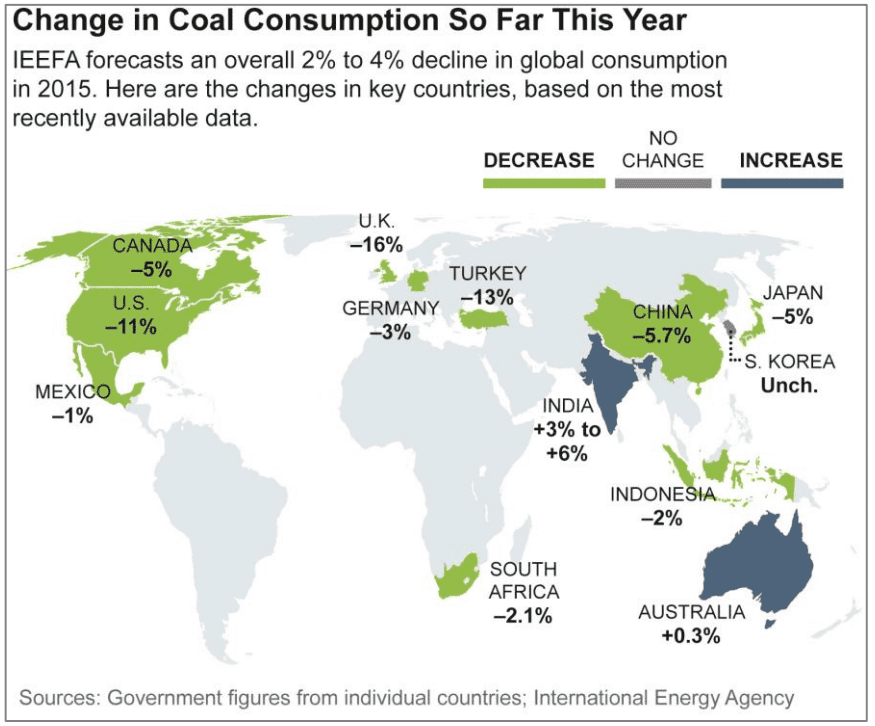 ● Investment Capital Is Moving Rapidly From Coal Into Renewables. Over the past decade, investors have put US$1.5 trillion into clean energy—mostly solar and wind, and 2014 was a record year. Renewable energy capacity, in the meantime, has grown even faster. These trends have triggered a considerable shift and growing acceptance in the financial market of the structural decline of coal and the demand for raising capacity in low-emissions investments. Key developments on this front include the decision this year by Norway’s Government Pension Fund Global, the world’s largest sovereign wealth fund, to divest from the coal sector, and the very recent decision by Allianz, the world’s largest insurance company, to follow Norway’s example. These two decisions combined will affect over $10 billion of investments.
● The Coal-Fired Sector Has Been Overbuilt. China has built more coal-fired plants than it can support, India is on a renewable-energy tear, and the U.S. is retiring coal-fired power plants.
● Coal Companies Are in Deep Financial Distress. Coal producers are in dire straits from a combination of energy-efficiency gains, eroding electricity demand, conversions to gas-fired power capacity, an expanding buildout of renewable energy projects, and the impact of pollution-control regulation.
● Structural Decline in Coal Demand Is an Increasingly Consensus Call. What was once an outlier point of view—that global coal markets are in decline—has become more mainstream.
● Global Banks Are Shifting Their Focus to Renewables. An increasingly sizeable group of financial institutions see the inevitability of rising regulatory pressures, and hence the rising stranded-asset risks of fossil-fuel assets.

Indeed, the fall of king coal becomes increasingly certain. Concerning the financial market, almost $2.6 trillion have been divested so far away from fossil fuels, mostly out of coal companies. Those who preferred to bet on coal got burned – bad. The already tanking industry will face even more serious blows in the coming years as the UK preps to phase out coal fired plants entirely by 2025. The province of Alberta, Canada has pledged the same by 2030. Other countries will likely follow suit later on.