The dangerous myth that climate change is reversible

A NOAA paper published 4 years ago showed, almost beyond the shadow of a doubt, that climate change is irreversible for approximately for approximately 1000 years. Despite this and several other papers that had pretty much the same conclusions, people still believe that climate change is reversible in the near future; it’s not. We’ve reached the point where the question is not if it’s going to be bad, it’s just how bad is it going to be. 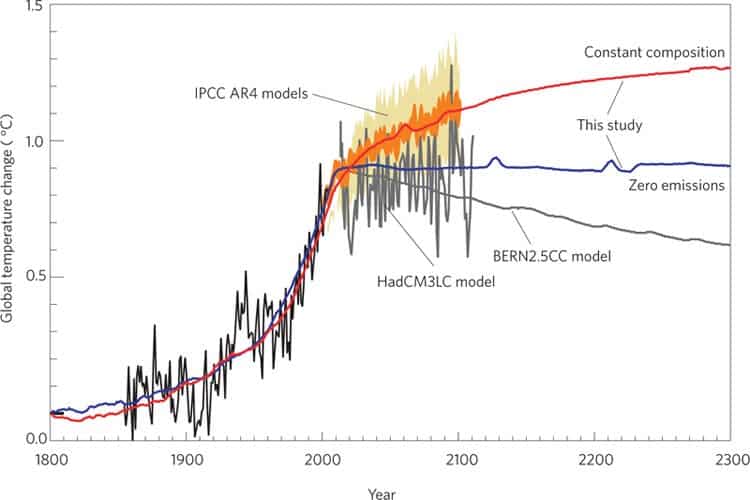 As RealClimate explains, we need a 60 to 70% globally reduction in CO2 levels to merely stabilize the situation, and that would still leave us with a a radiative imbalance that would lead to “an additional 0.3 to 0.8ºC warming over the 21st Century.” Needless to say, realistically speaking, that isn’t going to happen.

Under all realistic scenarios, the societal and economic inertia will drive us to release more and more CO2 into the atmosphere, further accentuating the effect, and further warming the planet. If we wait until results will really kick in, it will probably be too late to do anything – which is why this delay in action is not only immoral, but also very dangerous. The entire situation becomes much more worrying when you consider the fact that surveys show most Americans believe climate change poses serious risks but also that reductions in greenhouse gas (GHG) emissions sufficient to stabilize atmospheric GHG concentrations or net radiative forcing can be deferred until there is greater evidence that climate change is harmful.