Given the sheer size of whales, it should be no surprise that they make some very important contributions to ecosystems.

by Contributing Author
in Animals, News, Oceanography
Reading Time: 3 mins read
A A

Given the sheer size of whales, it should be no surprise that they make some very important contributions to ecosystems. What you may find surprising is the form that some of these contributions take. When we think of ecological engineers we tend to think of elephants, beavers, and corals, but the open ocean is also a fluid system where whales hold significant influence.

There is a tendency for nutrients in the form of biological material to slowly sink away from the surface into deep ocean environments. This downward migration of debris is referred to as a biological pump, and the debris itself is called marine snow. The nutrients in marine snow can become tied up in ocean floor sediments or dissolved in water that may take decades, if not centuries, to resurface. Consequently, ecosystems at the surface of the ocean are often nutrient-poor, whereas cold, deep water is often nutrient-rich.

It turns out that whales help to even the balance by a simple mechanism called a whale pump. They feed at varying depths, but they seem to defecate almost exclusively at the surface. These massive clouds of poop provide a big boost of iron and nitrogen to the ecosystem, and since whale excrement is mostly liquid, those nutrients are more likely to remain in suspension than sink. For a species that feeds at great depths, such as sperm whales, this pump effect would be very pronounced.

The whale pump phenomenon was first formally observed in 2010, so we are still honing our understanding of it. Quantitative estimations so far confirm that they transport sufficient nutrients to significantly enhance the productivity of surface-water environments (Roman and McCarthy 2010).

Whales don’t just engineer ecosystems; They create them. When a whale dies, it’s carcass sometimes descends all the way to the ocean floor. Within days of it’s arrival, scavengers will have converged from far and wide for a feast.

There are various stages that whale fall ecosystems progress through. Initially, there is a swarm of fish, sharks, and crabs that are capable of tearing through the tough blubber. As the carcass becomes more degraded, most of the larger organisms depart leaving the smaller scavengers like starfish to consume the residual tissues. Eventually, only bones remain, along with the bacteria, worms, and clams they support. There isn’t a clear consensus on how long whale falls persist, but 10-20 years seems to be a safe estimation.

The diversity found at whale falls rivals that of hydrothermal vents (Smith and Baco 2003), and whale falls are almost certainly more abundant. Unfortunately, in part due to the difficulty of locating and accessing them they haven’t been particularly well studied. What is clear is that these are one-of-a-kind ecosystems, and their abundance is directly tied to that of whales. 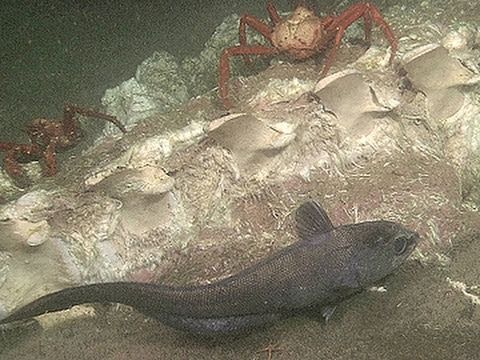 Whale populations have suffered greatly in recent centuries, largely thanks to the advent of whaling, and have never fully recovered. By conservative estimates, the historical global population was 6 times greater than it is today (Roman and Palumbi 2003). With their unique ecological contributions taken into consideration, this dramatic decline is likely to have had profound effects throughout the oceans. Therefore, it may be wise to rethink what we consider to be the natural state of our oceans.

This is an article by Steven Sande. Steve is an aspiring environmental professional from Ontario, Canada. You can find more of his work at stevenandrewsande.com.