Russian geneticist breeds the first domesticated foxes and I want one

by Alexandru Micu
in Animals, Biology, News, Science, Videos
A A

A Russian geneticist has done something that took our ancestors thousands of years in just five decades. By selectively breeding hundreds of Vulpes vulpes foxes over multiple generations, Dmitry K. Belyaev has created a never-before-seen pet: the domesticated fox.

On an unassuming farm in Novosibirsk, a new breed of pets is poised to take the world’s hearts by storm. In his quest of recreating the process by which ancient humans turned wild dogs from predators to “man’s best friend’ to learn about domestication, Russian geneticist Dmitry K. Belyaev has created the world’s first docile foxes.

In essence, what he did was husbandry or artificial selection. By basing future generations on individuals who exhibited one desired trait the strongest, he gradually added to the tameness of the animal — this was the same process our ancestors used to increase their crops’ and livestock’s yield and hardiness. The process was pretty straightforward but time-consuming. Belyaev visited fur farms around Russia in the late 1950’s and selected the friendliest foxes he could find. He bred successive generations starting from this stock, selecting the tamest individuals each time.

In the early 2000s, almost all of the foxes on Belyaev’s farm show surprising changes in behavior, reported Lucy Jones for the BBC.

Foxes are considered especially hard to tame, but these ones on the farm seem to enjoy their time with people. They acted more like dogs than what we’d expect from a fox — things such as wagging their tails or perking up in the presence of a human. The foxes didn’t show any of the aggressive or skittish nature we expect in wild animals. On the contrary, they would seek out people to pet them and even lick their handler’s face — and you can’t really get more “dog” than that.

Belyaev said this all happens without any sort of training on his part. The only thing he did was to select for the foxes that interacted with humans the best.

“They’re genetically designed to crave human contact,” said Ceiridwen Terrill, a professor of Science Writing and Environmental Journalism at Concordia University in Portland who visited the farm and got to pet the foxes, for NPR.

“So that fox loved having its belly scratched.” 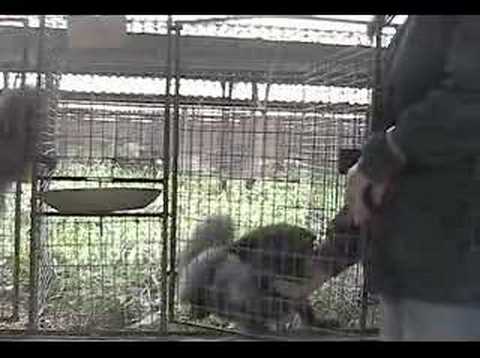 The foxes also started looking tamer over time: their ears got floppier, they developed shorter legs, tails, snouts, and their skulls widened. Their breeding patterns have also changed, and the foxes now mated out of season and had on average one more offspring per litter. In a 2009 paper, Lyudmila Trut of the Institute of Cytology and Genetics at the Russian Academy of Sciences, who now oversees the farm, says this is likely caused by neurological and endocrinological changes promoted through selective breeding.

The paper found that compared to wild foxes, Belyaev’s pets show the difference in brain chemistry. Their adrenal glands are less active but they have higher levels of serotonin, which helps mediate aggressive behavior, Trut writes. The droopy ears could be explained by their slower adrenal system, BBC writes, and the selected hormonal differences could also inadvertently promote physical differences. Dogs likely went through much the same process over the course of hundreds of generations as they gradually adapted to living with us.

The experiment confirms our theories regarding domestication. Not only the fact that we can bend a species evolutionary course in our favor, but also that the process affects more than their behavior. Domestication alters a species looks, inner workings, and the cycles they live their lives by.