Owls perceive moving objects like we do, suggesting bird and human vision are quite similar

The findings suggest that this ability evolved before the human neocortex appeared.

Differentiating a moving object from a static background is crucial for species that rely on vision when interacting with their environment. This is especially true for a predator such as an owl. Now, a new study found that owls and humans share the same mechanics for differentiating objects in motion.

Individual cells in the retina can only respond to a small portion of a visual scene and, as such, send a fragmented representation of the outside world to the rest of the visual system. This fragmented representation is transformed into a coherent image of the visual scene in which objects are perceived as being in front of a background. Previous studies, mostly performed on primates, found that we perceive an object as distinct from a background by grouping the different elements of a scene into “perceptual wholes.”

However, these studies left some important questions unanswered. For instance, is perceptual grouping a fundamental property of visual systems across all species? At least, this seems to be true for barn owls (Tyto alba), according to the latest findings by Israeli researchers at Technion University’s Rappaport Faculty of Medicine in Haifa.

Yoram Gutfreund and colleagues studied both the behavior and brain of barn owls as the birds tracked dark dots on a gray background. The owls’ visual perception was tracked by a wireless “Owl-Cam”, which provided a perceptual point of view while neural activity was mapped in the optic tectum — the main visual processor in the brain of non-mammalian vertebrates. 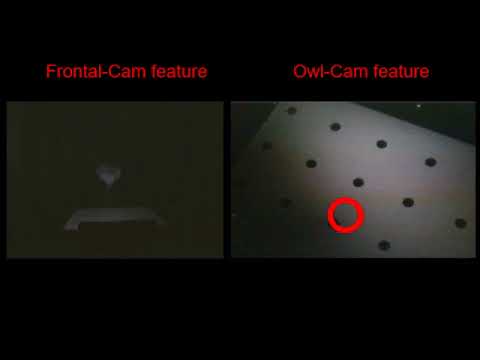 Caption: An example of owl DK spontaneously observing the computer screen. The target is embedded in a static array of distractors (singleton). The left panel shows a frontal view of the owl and the right panel the corresponding headcam view. The red circle in the right panel designates the functional fovea. The color of the circle changes to green when it is on target. Credit: Yael et al., JNeurosci (2018). 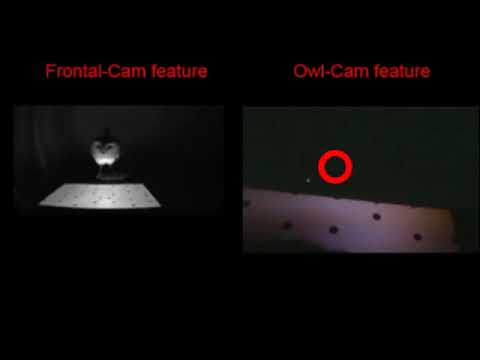 Caption: the same setup as above only now the target is embedded in a mixed array of moving distractors. Credit: Yael et al., JNeurosci (2018).

The two experiments conducted by the researchers revealed that owls seem to be indeed using perceptual grouping, suggesting that the visual systems of birds and humans are more similar than previously thought. More importantly, the study provides evidence that this ability evolved across species prior to the development of the human neocortex.

The findings appeared in the Journal of Neuroscience.