Mysterious ‘Ghost Shark’ caught on film for the first time

This beautiful, eerie creature has been captured on film for the first time. 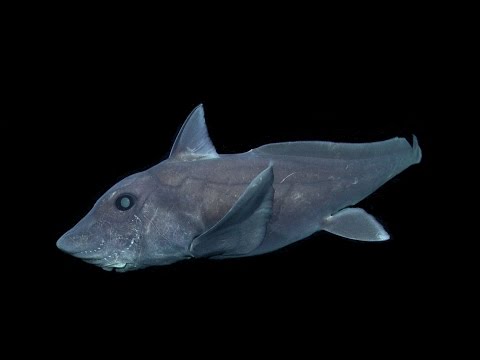 Ghost sharks are also called Chimaeras – a Greek word used to describe implausible mythical creatures – and it’s easy to understand why. These deep-sea denizens have haunting dead eyes, wing-like eerie fins, and retractable penises on their heads. They live at depths of up to 2,600 metres (8,500 ft), in complete darkness, where a functional set of eyes wouldn’t do much good. Instead, they feel the world around them with sensory cells in the channels on their heads and faces, called lateral line canals. Although related to sharks and rays, ghost sharks split from that biological group 300 million years ago – way, way before dinosaurs even emerged on Earth. Unlike sharks which have replaceable teeth in a conveyer belt-like structure, Chimaeras have a permanent set of ‘tooth plates’ to grind their prey into pieces.

Despite their clunky appearance, they’re really fast and agile, which means that unmanned rovers just haven’t been able to capture them on tape – until now. Dave Ebert, program director for the Pacific Shark Research Center at Moss Landing Marine Laboratories told National Geographic that the discovery of the creature was ‘dumb luck’ – especially because it was filmed so far away from its known habitat.

“Normally, people probably wouldn’t have been looking around in this area, so it’s a little bit of dumb luck,” he says.

The species is usually found near Australia and New Zealand but now, it was shot in the oceans off Hawaii and California – a very long way from home, at a depth of 1,640 metres below the surface. Researchers at the Monterey Bay Aquarium Research Institute (MBARI) have identified the species as Hydrolagus cf. trolli – more commonly known as the pointy-nosed blue chimaera. There is also the possibility of this being an entirely new different species but without proper DNA analysis, it’s almost impossible to tell. In fact, the cf in its name indicate that it looks like Hydrolagus trolli, but this is still not certain.

“If and when the researchers can get their hands on one of these fish, they will be able to make detailed measurements of its fins and other body parts and perform DNA analysis on its tissue,” Kim Fulton-Bennett from MBARI explains. “This would allow them to either remove the cf. from their species description, or assign the fish to a new species altogether.”

The footage was captured in 2009, but it was only now released to the public, alongside an accompanying scientific paper. The paper highlights that the ghost shark was found much outside its proposed range, and this might indicate that it, like other deep sea creatures, gets around a lot.

“Similar looking, but as yet unidentified, ghost sharks have also been seen off the coasts of South America and Southern Africa, as well as in the Indian Ocean,” Fulton-Bennett reports. “If these animals turn out to be the same species as the ghost sharks recently identified off California, it will be further evidence that, like many deep-sea animals, the pointy-nosed blue chimaera can really get around.”