by Mihai Andrei
in Animals
Reading Time: 1 min read
A A
Share on FacebookShare on TwitterSubmit to Reddit

Biologists working in Brazil have discovered nine new species of orange, purple and pink tarantulas lurking around in the trees. 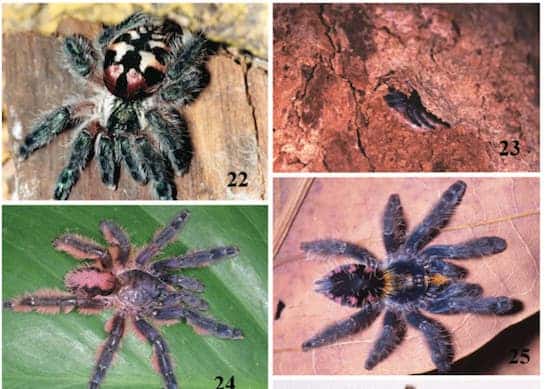 The haul of new spider species came from a lengthy study conducted in the Amazon by tarantula specialist Dr Rogerio Bertani of the Instituto Butantan in Sao Paulo. He described these new findings in the ZooKeys magazine.

“These are the smallest arboreal tarantulas in the world, and their analysis suggests the genus to be very old, so they can be considered relicts of a formerly more widely distributed taxon.”, he said. “Instead of the seven species formerly known in the region, we now have 16,” Bertani added.

Arboreal tarantulas, quite common throughout the world, are generally smaller and lighter; as a matter of fact, four of the nine species included in the study are the smallest tarantula species ever found.

The paper notes that these fluffly, cute, coloured horrors would likely pose interest for the illegal pet market, but it also suggest they could prove to be quite useful in the pharmaceutical industry. The species are endangered because they are found mostly in areas where they are suffering high pressure from human activities, researchers said.