Researchers discovered a new outstanding feature of the chameleon: its bones shine in a blue hue in UV light.

by Francesca Schiopca
in Animals, Biology, Discoveries, Environment
A A

The lizard master of disguise is surely a very special creature, we can all agree. Researchers discovered a new outstanding feature of the chameleon: its bones shine with a blue hue in UV light.

Bioluminescence is not that uncommon among marine creatures and some insects (see fireflies), but most terrestrial animals don’t quite possess this eye-endearing feature. The fact that researchers found biogenic fluorescence in chameleons — an entirely earthbound animal — is surprising.

“We could hardly believe our eyes when we illuminated the chameleons in our collection with a UV lamp, and almost all species showed blue, previously invisible patterns on the head, some even over the whole body,” said David Prötzel, lead author of the new study and a Ph.D. student at the Bavarian State Collection of Zoology (ZSM).

German biologists found that the small bone bumps on chameleons’ heads fluoresce under UV light in a blueish shade. These tiny bone structures absorb UV radiation through small “windows” in the skin and then emit a soft blue light. Actually, the windows are just metaphorical, because the thin epidermis layer that covers the projections is transparent. 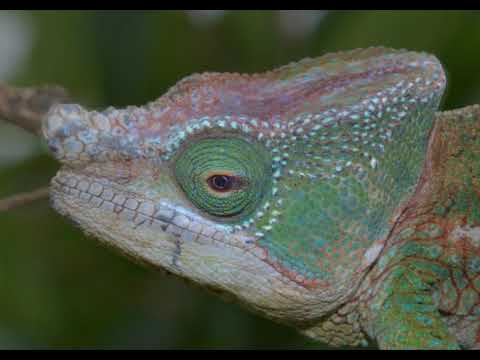 After seeing their shimmer under UV-lighting, scientists performed microCT scans and matched the small bone tuberosities to the blue colored pattern.

The fact that bones fluoresce under UV conditions was long-known. But using this phenomenon to intentionally fluoresce different body parts surprised the authors, as it was the first time scientists had encountered such a feature.

Okay, okay, but what’s the deal with all this effort to display such a multitude of colors, even fluorescence?

The myth that chameleons use color-change as camouflage has been debunked. A new theory states that these reptiles use skin color-shifting as a way to communicate with their kin. Taking into consideration that most males from the Calumna genus have significantly more fluorescent tubercles than the females, researchers suppose that their goal is to attract mates. Blue, being a rare color in the forest, should be quite eye-catching in this regard.

Another interesting observation is the distribution of fluorescence among different genera of chameleons. Researchers discovered that forest-living species are more prone to exhibit glowing tubercles than species which live in open environments.

“As shorter (UV, blue) wavelengths are scattered more strongly than longer wavelengths the UV component under the diffuse irradiation in the forest shade is relatively higher compared to the direct irradiation by the sunlight,” the authors write in the journal Nature.

“Consequently, using UV reflections for communication is apparently more common in closed habitats than in open habitats, as has been shown in chameleons of the genus Bradypodion.”