Scientist finds the worst places to get stung by a bee – by experimenting on himself. In order, it’s the nostril, lip, and penis

Talk about dedication to science! Michael Smith, a graduate student at Cornell University mapped which parts of the body are most painful when it comes to bee stings – by testing it on himself!

Smith’s work focuses around the behaviour and evolution of honeybees. It all started when a honeybee flew up his shorts and stung him in the testicles. I know, I squirmed when I read that too… but apparently, it’s not all that bad.

“If you’re wearing shorts and doing bee work, a bee can get up there easily,” he says. “But I was really surprised that it didn’t hurt as much as I thought it would.”

That got him thinking – what are the worst places you can get stung by a bee?

The problem with this kind of pain studies is that it’s pretty hard to find volunteers. People don’t really sign up to be stung by a bee – which is why he conducted the study on himself. After all, if anyone was to be objective, it was him.

As he set out to do his research, he found that there wasn’t really much scientific evidence available. Even Justin Schmidt was no help. Schmidt created the Schmidt Sting Pain Index—a scale that measures the painfulness of insect stings using wonderfully poetic synaesthetic descriptions – of pain. According to his index, the sweat bee sting (1 on a scale of 0 to 4) feels like “a tiny spark has singed a single hair on your arm”. The yellowjacket sting (2) is “hot and smoky, almost irreverent; imagine W. C. Fields extinguishing a cigar on your tongue.” The granddaddy of all insect stings is the bullet ant (4+)—produces “pure, intense, brilliant pain, like fire-walking over flaming charcoal with a 3-inch rusty nail grinding into your heel.”

Schmidt acknowledged, of course that the intensity of the pain differs depending on the body part which was stung, but he didn’t explain how it varies. So Smith started to test it on himself. He writes in the paper:

“Cornell University’s Human Research Protection Program does not have a policy regarding researcher self-experimentation, so this research was not subject to review from their offices. The methods do not conflict with the Helsinki Declaration of 1975, revised in 1983. The author was the only person stung, was aware of all associated risks therein, gave his consent, and is aware that these results will be made public.”

He was pretty methodical in his research. He collected bees by grabbing their wings “haphazardly with forceps” and pressed them against the body part of choice until they stung him. He left the stinger there for a full minute before removing it, and then rated his pain on a scale of 1 to 10.  Pain may be pretty hard to estimate with accuracy, but studies have shown that on a subjective scale of reference, people are pretty good at charting different pain levels.

He administered five stings a day, always between 9 and 10am, and always starting and ending with “test stings” on his forearm to calibrate the ratings. He kept this up for 38 days, stinging himself three times each on 25 different body parts – and lots of times on his forearm. Here is the pain map he created for bee stings: 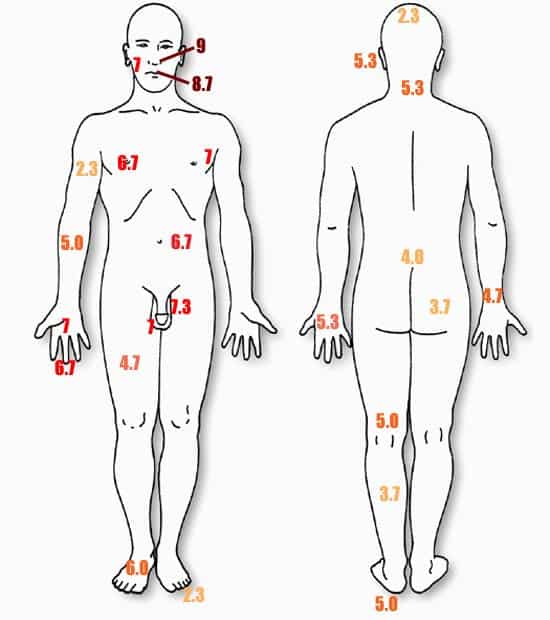 “All the stings induced pain in the author,” Smith writes. The least painful locations were the skull, upper arm, and tip of the middle toe (all averaging 2.3). “Getting stung on the top of the skull was like having an egg smashed on your head. The pain is there, but then it goes away.”

Meanwhile, the most painful sting was on the nose – a little surprising maybe.

“It’s electric and pulsating,” he Smith. “Especially the nose. Your body really reacts. You’re sneezing and wheezing and snot is just dribbling out. Getting stung in the nose is a whole-body experience.”

I find this kind of dedication laudable, although a little bit worrying. Smith wanted to actually sting himself in the eye as well, but after a talk with his advisor, he dropped the idea.

“By the time I got round to the third round, I thought: I really don’t want to do my nose again,” he says. “I had originally had the eye on the list, but when I talked to [my advisor Tom Seeley], he was concerned that I might go blind. I wanted to keep my eyes.”

Clearly, this data is pretty subjective, but Smith believes that aside from some particularities which vary from human to human, the map would look more or less the same. Also, he doesn’t suggest a repeat of his painful experiment.

“I didn’t see a lot of merit in repeating this with more subjects,” he says.