NASA doesn't know yet what could have caused it.

For the past 11 years, NASA’s prolific Mars Reconnaissance Orbiter (MRO) has been beaming back to Earth some of the most amazing images of the red planet. Bearing this track record in mind, it’s rather striking that only recently has an unusual feature come to light — a huge, deep hole somewhere in a crater-riddled area on the planet’s South Pole. How did we miss it so far?

Mars has a very thin atmosphere about 100 times less dense than here on Earth. Since it doesn’t have an active core, Mars doesn’t have a magnetic field either. With no thick atmosphere nor a magnetic field, Mars is at the mercy of the elements. It’s believed there are more than half a million meteorite impacts which littered the planet with craters. Ancient floods from the time Mars could sustain flowing water billions of years ago also left their mark carving gorges and channels. So, it’s not surprising to find various holes and pits on Mars.

This one is different, though. Hundreds of miles up above, MRO using its High Resolution Imaging Science Experiment, or HiRISE camera, to capture images of this mysterious circular depression whose features are so far unprecedented. The pit is surrounded by patches of frozen carbon dioxide and reflected light suggest its bottom is filled with ice. It’s also enormous, at least a couple hundred meters across.

What could have caused it is the million dollar question right now. NASA is analyzing two possibilities at the moment: either something punched through, like a meteorite impact, or — far more likely — the pit formed after the ground collapsed, like a massive sinkhole.

Considering that it’s NASA we’re talking about, they’ll likely come to the bottom of things eventually. But this is certainly not the first time hole-like features have left NASA scientists scratching their heads. In April, the space agency posted this photo, also taken by MRO, of a circular feature that might be an impact structure on the South Polar layered deposits.

In other MRO related news, NASA compiled the most striking features of Mars that are reminiscent of planet Earth in a video called The Many Faces of Mars, as seen by the spacecraft. “Earth has more in common with Mars than you might think,” NASA wrote. “Color-enhanced images like these help scientists interpret dynamic features on the Red Planet.” 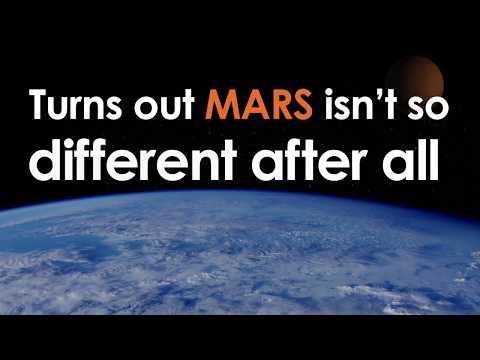