by Tibi Puiu
in Science, Space, Space flight
Reading Time: 5 mins read
A A
Share on FacebookShare on TwitterSubmit to Reddit

We’ve seen a lot of concepts cross the realm of SciFi into reality, however transferring fabrics of imagination to practical applications which respect the laws of physics can be troublesome, if not sometimes impossible. If in a book or TV show, like Star Trek for instance, things like teleportation, time travel or faster than light speeds are explained and applied in terms as simple as flicking a switch, in reality the laws of physics can not be re-written. Inspiration is a wonderful thing, and Star Trek, for one, not only offered some incredible ideas to engineers and inventors across the world, but also nurtured and directed a myrriad of enthuasists towards studying science.

The latest trekkie spin-off is the warp-drive. The concept is simple, in words – nothing can travel faster than the speed of light in space; however, if you’re not in space, you might be able to get around this law –  a quantum loophole. Now, bear with me. The whole concept of warp drive revolves around warping space around an object. This warp field, which in theory can be created with a ring of exotic matter wrapped around a football shaped spaceship,  will create a region of contracted space in front of it and expanded space behind.

Why building a warp-drive is so hard 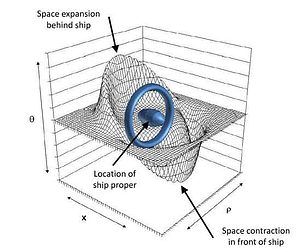 A practical, real-life warp drive was first discussed in scientific terms in 1994 by Mexican physicist Miguel Alcubierre. Subsequent mathematical analysis suggested, however, that propelling a spacecraft through a warp drive would require cosmic amounts of energy. For instance to warp a few atoms, you need the energy of three suns. For a whole spaceship the required amount of energy could not be fathomed by the human mind.

Also, there’s another issue which came to scientific attention a few months ago. In a previous post on ZME Science, I wrote how some researchers at Sydney University studied what would happen, were it possible, when a spacecraft would halt its faster than light propulsion and exit warp-drive. “The University of Sydney scientists did a bit of math on the data which would result from the effects of faster than light space travel via Alcubierre drive and found that the warp bubble would gather cosmic particles during its voyage. Since there isn’t such a thing as empty space, the spacecraft in question would most certainly gather particles in its warp bubble, no matter its trajectory. When the spacecraft would eventually come out of warp-drive, and superluminal speeds, the gathered particles would be released in an energetic outburst. These can be as energetic as the powerful gamma-rays, the researchers claim.”

Why are we still talking about this then? It’s clearly unpractical. Well, that’s not what NASA believes. The agency, not a 17-year-old basement discussion group, believes warp drive is plausible and is very much interested in probing its applicability. At the 100 Year Starship Symposium, NASA researcher Harold White held a presentation where he spoke about warp-drives in very real-life terms. Dr. White and other physicists have found loopholes in some mathematical equations, which according to them mean that the required amount of energy is much less than previously thought.  More specifically, they found if the ring encircling the spacecraft was adjusted into more of a rounded donut, as opposed to a flat ring, then the required amount of energy would be contained in a few thousand pounds of mass – that’s considerably less than let’s say…Jupiter.

Proof of a working warp-drive

At  NASA Eagleworks, Dr. White and colleagues are looking to practically prove the concept of warp-drive by lab experiments. There, the scientists have set-up a mini warp-drive called White-Juday Warp Field Interferometer. “We’re trying to see if we can generate a very tiny instance of this in a tabletop experiment, to try to perturb space-time by one part in 10 million,” White said.

Is the warp-drive an outlandish idea? Definitely! But if scientists and mankind wants to reach for stars and travel to distant worlds, well the old fashion rocket boosters aren’t gonna cut it. You need to resort to uncoventional ideas, at least try them out, and Dr. White, a reputable scientist, is on the forefront of viable space travel research.