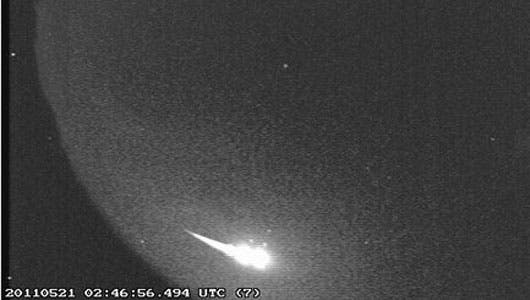 In a relevant display of  NASA’s fireball-observing network capabilities, a set of automatic robotic cameras caught a man-sized meteor as it blasted though Earth’s atmosphere causing a fireball spectacle.

Burning down in flames

Thankfully, the meteor was too small and never got a chance to touch ground, since it blazed to smithereens at 38 miles (61 km) above the town of Villa Rica, Ga., before subsequently four distinct flares emanated from the comet as the chunk broke apart multiple times.

Although fireballs like the Macon meteor are a splendor, they’re not all that rare. Objects the size of washing machines are reported to enter the Earth atmosphere every month or so, but most of the time they burn out before reaching Earth’s surface. This one is special, however, since it was all caught on tape, the video of which you can see right below.

This was all captured by NASA’s fireball-observing network, which has open operational for only three years now. The network comprises of  a set of “smart” cameras linked into a computer system that automatically analyzes their video, then calculates relevant information about incoming space rocks’ trajectories and orbits.

Currently, there are the two in Georgia, one in Huntsville, and one in southern Tennessee and NASA officials say the hope to increase the number to 15 such cameras in various locations throughout the eastern United States