by Dragos Mitrica
in News, Space
A A

What’s that – a starfighter? Ambitious as he may be with his SpaceX ventures, Elon Musk isn’t quite there yet. What he recently unveiled is a new rocket configuration called “X-wing” – like the epic Star Wars spacecraft – that is going to help the next, upgraded version of the Falcon 9 to land itself vertically on a moving platform with pinpoint accuracy. Reusuable rockets represent the future, and if space flight is to take serious leaps forward, the industry needs to take note of this. Reusuable rockets could bring down the cost of launching a pound of payload in space a hundred fold and SpaceX, led by Musk, is an uncontested leader in this field.

To land rockets vertically, engineers at SpaceX have devised a two-step solution. First, a floating landing pad that measure 90x50m, which can be positioned autonomously anywhere on water via GPS. It has four powerful oil rig thrusters to keep it in position within 3 meters, even in extremely bad weather.  Yet, for the Falcon 9 – a rocket which spans over 20 meters when its landings legs are deployed – to land on the drone pad, it needs a phenomenal control system. This is where the X-wing comes in.

The X-wing config is nothing but a set of “hypersonic grid fins” which can turn independently to control the craft’s angle, speed and vector. The video below shows a Falcon 9R taking off and landing with both landing legs and some prototype (small) fins, during an experimental launch in June. 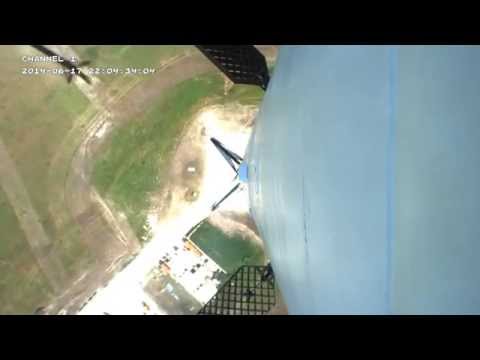 We might be seeing a Falcon 9 fitted with X-wing within just a couple of weeks, if SpaceX decides to use the config for the cargo delivery to the International Space Station scheduled for 16 December. Right now, Musk thinks there’s a 50/50 chance for his reusable rocket to work, but considering SpaceX will make more than a dozen launches in 2015, it’s safe to say that time and experience will be on their side. “It’s quite likely—probably 80 to 90 percent likely—that one of those flights will be able to land and refly,” he said.

Grid fins are stowed on ascent and then deploy on reentry for “x-wing” style control. Each fin moves independently for pitch/yaw/roll.