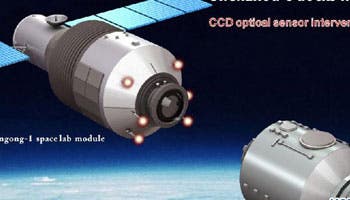 On November 1st, only a few weeks ago, China opened a new chapter in its space program after successfully docking two unmanned spacecraft in Earth’s orbit, an unprecedent event for the nation. On Monday, Shenzhou 8 craft re-docked with the Tiangong 1 module, the later which is set to become the first component for China’s own space station. This second re-docking  signifies a big step for China toward building a space station and developing a human spaceflight program.

Before today’s re-coupling, the two jointed spacecraft passed above the planet in an orbit 213 miles above. A second successful dock can imply that the Chinese autonomous, remote controlled procedure can be considered reliable.

“They have plans to build a space station, and of course that’s not possible without perfecting docking between two different craft, and the fact that they have perfected automated docking is a big step forward. The Americans didn’t do it for decades after they launched their space program,” said Peter Bond, consultant editor for Jane’s Space Systems and Industry.

The docking system aboard the Shenzhou 8 is of extreme intricacy, composed of 10,000 parts, and the more than 600 instruments. Like most things nowadays, these too were made in China.  Two more docking missions are expected for the forthcoming year, as China  plans to establish its own space lab around 2016 and a manned space station around 2020. Speaking of the docking system, with just a few minor adjustments, experts claim the Chinese docking mechanism would be compatible with the ports of the ISS and U.S. space shuttles as it allows any two similarly equipped spacecraft to dock with each other. However, this most likely won’t happen any time too soon.

These ambitious goals have been established by the nation after they’ve been refused access and contributions to the International Space Station, particularly by the US, which is China’s direct economical and political rival. Europe on the other hand, is more open to collaboration with the Chinese. On the very launch of Shenzhou 8, Germany had an important space research unit piggy bagged, hopefully clearing paths for a more unified exploration in the future. Space should be conquered first by men, and lastly by nations.