Saturn's moon Titan has some odd similarities to Earth: it has clouds, lakes and rain, except they're made of methane and ethane.

by Dragos Mitrica
in Astrophysics, News, Remote sensing
Reading Time: 2 mins read
A A
Share on FacebookShare on TwitterSubmit to Reddit

Titan – one of Saturn’s moons – is one of the most mysterious and mindblowing places in the solar system. Aside from Earth, it’s the only place we know that has liquid on its surface. Sounds like a nice place, only it’s not water.  These are in the form of lakes and rivers composed of liquid hydrocarbons including Ontario Lacus, a lake 240 kilometres (150 miles) long in Titan’s southern hemisphere. Funny thing is that these hydrocarbons undergo a similar process like the water system does on Earth. The methane evaporates from the surface, forming extremely thick clouds in the skies, before eventually raining down and replenishing the lakes and rivers on the ground.

Do you know what else Titan has? Dune fields. Once again, the similarities with Earth diverge in the details. Titan’s dunes are indeed made of sand, but the hydrocarbon variety. This particular photo was taken by NASA’s Cassini probe from 450,000 miles away. The  H-shaped area is filled with these hydrocarbon dunes. These are somewhat distinct. The north side is called Fensal and the south side is called  Aztlan. 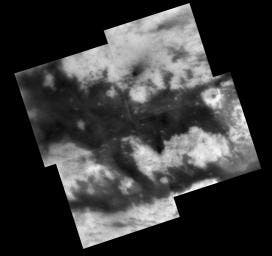 Once known only as “the H” because the region looks something like the letter on its side, features in this region now possess provisional names assigned by the International Astronomical Union (see: http://planetarynames.wr.usgs.gov/). The northern branch of the H is now called “Fensal,” while the southern branch is known as “Aztlan.”

Cassini regularly monitors changes on Titan, and researchers hope that through this, they can better understand the geological and environmental setting of the moon. Titan is the only natural satellite known to have a dense atmosphere, and the only object other than Earth where clear evidence of stable bodies of surface liquid has been found, so the motivation is there to study it. The surface of Titan has been described as “complex, fluid-processed, [and] geologically young” – it’s dynamic and difficult to study.