Astronomers have just spotted the biggest known spiral galaxy – by accident. A team was looking through data from the Galaxy Evolution Explorer (Galex) satellite for star-forming regions around a galaxy called NGC 6872, only to be shocked noticing a vast swathe of ultraviolet light from young stars, indiacting that it also contains remnants of other galaxies, with which is became about 5 times bigger than the Milky Way. 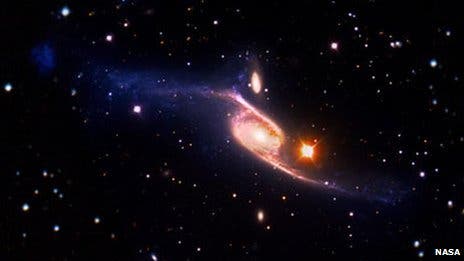 “It’s been known to be among the largest for two decades, but it’s much larger than we thought,” explained Mr Eufrasio. “The galaxy that collided with the [central disc of NGC 6872] splashed stars all over the place – 500,000 light years away.”

NGC 6872, a galaxy about 212 million light-years away in the constellation Pavo was previously known to be among the largest spiral galaxies; near it lies the lenticular galaxy called IC 4970, which appears to have crashed through the spiral relatively recent – in astronomic times that is.

“I was not looking for the largest spiral – it just came as a gift,” Mr Eufrasio explained.

According to NASA, this finding lends evidence to the theory that large galaxies – including our own – “grew through mergers and acquisitions” – basically colliding with other galaxies.

“It shows the evolution of galaxies in the larger context of the Universe – how the large galaxies we had before were accreted from small clumps in the early Universe,” Mr Eufrasio said. “We’re just seeing one example of two interacting galaxies but in the past that happened much more often – that’s how the big [spiral galaxy] discs we have were probably formed. Putting that in a larger context, it’s a very cool system.”