by Mihai Andrei
in News, Space
Reading Time: 1 min read
A A
Share on FacebookShare on TwitterSubmit to Reddit

I’m not a big fan of selfies, but when you’re on Mars, you can take all the selfies you want! NASA’s Curiosity Rover has taken some pretty cool of itself – and the Martian surroundings. 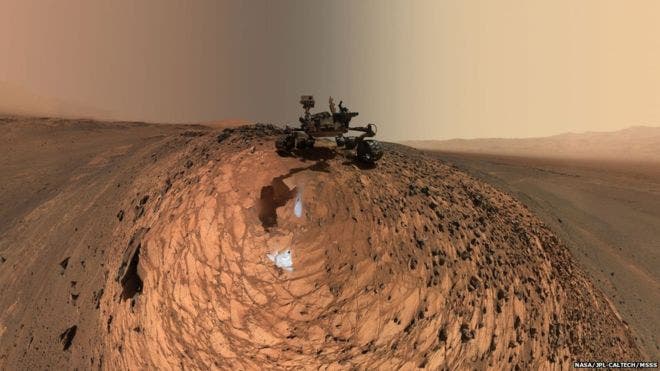 This latest picture was taken by the rover at “Buckskin” – the 7th rock the rover will sample for analysis. This particular portrait differs from the others in that it is taken from a low angle. The two bright gray patches were actually made by Curiosity. The triangular patch is where the rover drilled Buckskin (a dark circle shows where the hammer tool went into the ground), while the other is a dump of powdered rock too large to be analyzed.

The Curiosity Rover has been on Mars for three years already – although it feels like yesterday. The rover’s main goals are to investigate the Martian climate and geology and assess if the field inside Gale Crater was ever inhabited by microbes, as well offer information for future potential human expeditions to Mars.

So far, Curiosity has already shown that Mars once had the right conditions for microbial life.