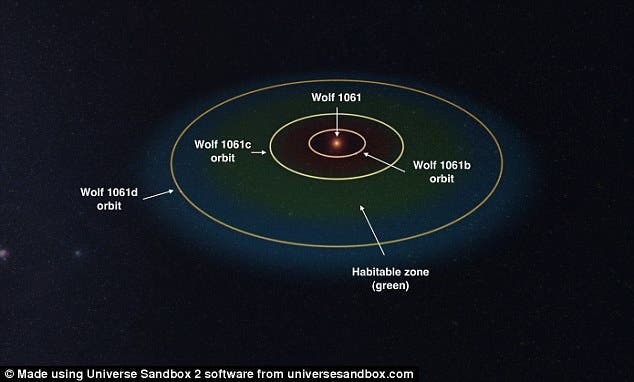 The planet, reported in the Astrophysical Journal Letters, is one of the three planets found by astronomers around a small red dwarf star called Wolf 1061 in the constellation Ophiuchus.

“The middle planet Wolf 1061c, is orbiting within the so-called ‘Goldilocks zone‘ — the habitable zone where it might be possible for liquid water and maybe even life to exist,” said the study’s lead author Dr Duncan Wright of the University of New South Wales.

The planet, which has a mass four times higher than that of Earth, is located at only 14 light years away from us. As a reference, Alpha Centauri, the closest solar system to ours lies 4.24 light years from the Sun, and Pluto is about 6 light hours away. This makes Wolf 1061c our solar neighbor, but it still makes it too far to explore with today’s technology.

“This discovery is especially exciting because the star is extremely calm. Most red dwarfs are very active, giving out X-ray bursts and super flares which spells doom for any life, given the habitable zone is so close into these stars.”

While a few other planets have been found closer, they’re not even close to being considered habitable. Its star has a quarter of the mass of the Sun and about half its temperature, but Wolf 1061c lies closer to its star than the Earth does to the Sun. The system itself could be very old, astronomers suggest.

The planets were discovered through the so-called wobble method. Basically, just like star keeps the planets in place through its gravitational force, so too do the planets exert a (much smaller) gravitational attraction to their star, which makes it wobble ever so slightly. By studying these wobbles, astronomers can indirectly identify the planets around the star and infer its properties.

“We actually see the entire star wobbling back and forth due to the gravitational tug of the planets as they orbit around the star,” said Dr Wright.

It seems like red dwarfs, stars that are smaller and a cooler than the Sun are most likely candidates to host habitable planets, and red dwarfs are also by far the most common type of star in the Milky Way, at least in the neighborhood of the Sun, but because of their low luminosity, individual red dwarfs cannot easily be observed.

“Our team has developed a new technique that improves the analysis of the data from this precise, purpose-built, planet-hunting instrument, and we have studied more than a decade’s worth of observations of Wolf 1061. These three planets right next door to us join the small but growing ranks of potentially habitable rocky worlds orbiting nearby stars cooler than our sun.”