The miracle of life.

by Elena Motivans
in Animals, Did you know?, News, Oceanography, Science
A A

A video from the Virginia Aquarium has gotten over 1.5 million views. In the video, a baby octopus hatches from a teardrop-shaped egg, turns brown, and swims away. It looks a bit like you would imagine an alien being born, except much cuter. It is a fascinating display and raises the questions of how octopuses are born and why they turn brown. 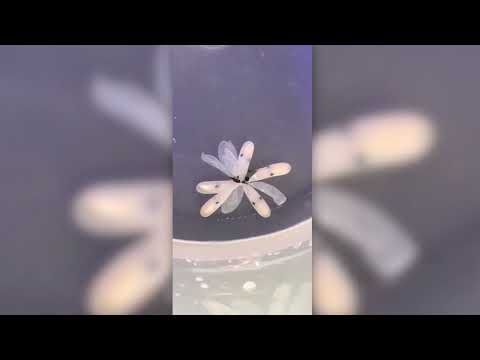 Footage of the baby octopus being born, in case you haven’t seen it yet. Video credits: YouTube/KRIS 6 News.

Octopuses usually don’t live so long — six months to five years on average — so they grow and reproduce quickly. When it is time to mate, male octopuses look for females. The males have an arm that is modified to deposit sperm. Some species of octopuses insert the sperm-arm into the female’s oviduct and others take off the arm and give it to the female to store in her mantle. The female then keeps the arm and spreads it over her eggs when she gives birth to fertilize them.

The mother octopus arrived at the Virginia aquarium half a year ago and laid 100-200 eggs two months ago. It was surprising that they were fertilized, because she is alone in the aquarium. She must have mated with a male in the wild; her species of octopus (Caribbean reef octopus) can store sperm for up to 100 days.

Some octopuses, usually the ones that are born near the ocean’s surface, start life very tiny. The ones at the Virginia aquarium are no bigger than the size of a pinky fingernail, despite looking much larger in the video. When they are the size of a golf ball, the aquarium will display them to the public. A baby octopus increases its weight by 5% every day so they grow very quickly. Octopuses are very efficient at turning food into body mass; at the end of its lifetime, an octopus weighs as much as a third of the food that it has consumed over its lifetime.

It was the aquarium’s first attempt to hatch octopuses, and 15-20 other babies have the born over the past few days. It isn’t unusual for newly hatched octopuses to change colours because the stress of hatching can cause its chromatophores, pigment-containing cells, to fire. Another reason could be that the octopus was trying to camouflage against the dark tabletop beneath it. Unfortunately, the outlook for baby octopuses isn’t so rosy; their survival rate is extremely low. For example, only 1% of giant Pacific octopuses grow to be 10 millimeters large.