by Alexandru Micu
in News, Science
Reading Time: 3 mins read
A A
Share on FacebookShare on TwitterSubmit to Reddit

Some 7,5 billion people now call Earth home, but that number may skyrocket to over 10 billion by 2050, the United Nations estimate.

Just last month, the World Population Clock announced that humanity has passed a huge milestone — the 7,5 billion people mark. While it took us a few thousands of years to get to this figure, it will take us a lot less to reach 10 billion according to a report published yesterday by the United Nations Department of Economic and Social Affairs, Population Division. In fact, they estimate that it will only take us a bit over 30 years.

This is the beauty of non-linear growth.

By 2030, Earth could harbor some 8.6 billion people, the report explains. By 2050, this number will likely increase to 9.8 billion, and populations will peak in 2100 at 11.2 billion, it goes on. This estimate is based on the current natality of around 83 million people per year worldwide, which the UN expects to keep driving up population numbers even as overall fertility rates go down.

This growth won’t be evenly spread around the globe, of course. Nigeria for example, which currently boasts world’s 7th largest population but the fastest growth of the world’s most populous countries, is estimated to become the world’s 3rd largest by 2050, a place currently held by the USA. The most populous country today, China, is expected to cede its place to India and sink to the 2nd place in around seven years as its policies limit growth.

Overall, this means that nine countries will concentrate about a half of the population growth estimated between now and the 2050 mark: Nigeria, India, the Democratic Republic of the Congo, Ethiopia, Tanzania, Uganda, Indonesia, Pakistan, and the United States.

The report doesn’t just look at the flat number of people currently living in the world but also takes into account factors such as fertility, life expectancy, immigration and refugee movements, to paint an accurate picture of how populations will evolve in time. One encouraging find is that although population numbers are on the rise, fertility rates (aka how many kids each couple has) are dropping almost throughout the globe, even in Africa. At the same time, life expectancy has risen globally from 65 to 69 years for men and 69 to 73 years for women, although the UN cautions that there are huge disparities between different countries. 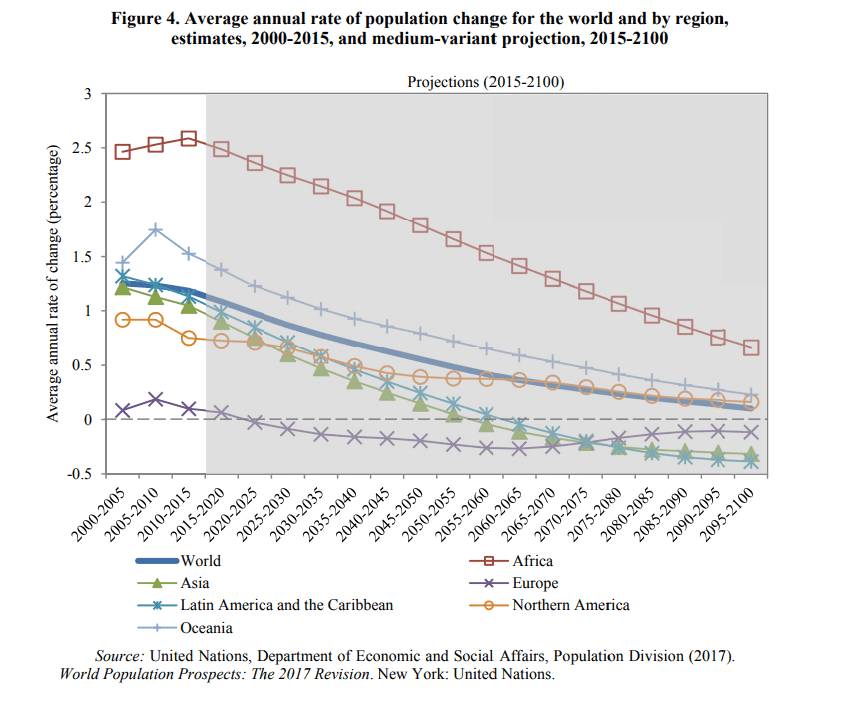 Europe stands out a bit from all other areas in the report. With a predominantly old population, high life expectancy, and low fertility, Europe’s population is estimated to remain relatively stable — experiencing a slight drop up to the 2060’s as the older generations pass away, and a slight increase by 2100 close to today’s levels. All other areas are estimated to experience a definite decline in population growth by 2100.

The Department of Economic and Social Affairs, Population Division says that the report could help agencies better tailor and implement the Sustainable Development Goals.