Something just smashed into Jupiter

by Dragos Mitrica
in Science
Reading Time: 2 mins read
A A

At this point, it’s pretty clear that a significant object smashed into Jupiter. The whole thing was captured on film below, more explanations after the video: 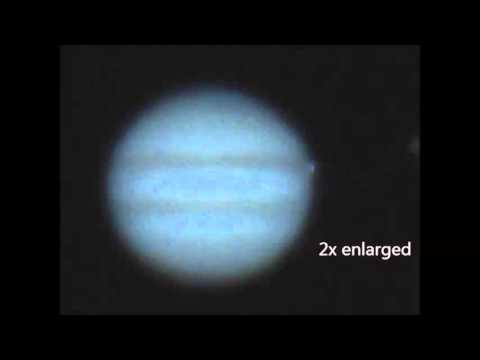 Two weeks ago, on March 17, Gerrit Kernbauer, an amateur astronomer in Mödling, Austria, was recording Jupiter using a 20 cm telescope. It’s quite standard stuff, but Kernbauer got more than he expected.  At 00:18:33 UTC he captured what looks very much like the impact of a small comet or asteroid into Jupiter!

The explosion was huge! Conducting a very basic (and unscientific analysis), Jupiter’s volume is 1300 times larger than that of Earth. The bang seems to be about 3-4% of Jupiter, so we’re looking at an explosion comparabile in size to the US. Judging by the size of that explosion, you’d think the asteroid is huge, but that’s not really the case. As Phil Plait of Bad Astronomy reports, the asteroid probably was a few hundred feet in diameter, not more. He explains:

“On average (and ignoring orbital velocity), an object will hit Jupiter with roughly five times the velocity it hits Earth, so the impact energy is 25 times as high. The asteroid that burned up over Chelyabinsk, Russia, in 2013 was 19 metres across, and it exploded with the energy of 500,000 tons [454,000 tonnes] of TNT. Now multiply that by 25, and you can see how it doesn’t take all that big a rock to hit Jupiter for us to be able to see it from Earth.

At these huge speeds, hitting the atmosphere is like slamming into a wall. A lot of people get understandably confused how an asteroid can explode due to air, but the pressures involved as it rams through the atmosphere at these speeds are ridiculously huge.”

Along with its moons, Jupiter’s gravitational field controls numerous asteroids that have settled into stable gravitational points. Jupiter experiences about 200 times more asteroid and comet impacts than Earth, so just keep your eyes on Jupiter – you’re bound to see something sooner or later.