by Tibi Puiu
in Robotics, Videos
Reading Time: 3 mins read
A A
Share on FacebookShare on TwitterSubmit to Reddit 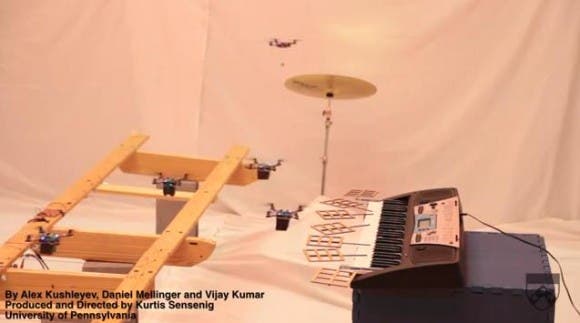 This year’s TED conference (Technology, Entertainment, Design) recently took place in Long Beach, California, and as expect, the event was filled with a slew of amazing speakers, each with an idea definitely worth spreading. One presentation, however, particularly blew my mind, namely that of roboticist Vijay Kumar, who along with colleagues from University of Pennsylvania’s General Robotics, Automation, Sensing and Perception (GRASP) Laboratory, amazed the TED crowd with what their flying robots can do.

The sophisticated quadrocopters designed by the researchers weigh only a tenth of a pound, span eight inches in length and are equipped with four rotors. It’s because of this tiny size however that they can perform all the amazing feats they’re capable of like performing 360-degree flips in less than half a second, effortlessly hover through hula hoops thrown into the air, build human structures, navigate and map buildings – all without the need for human control.

What’s maybe the best display of what these quadrocopters are capable of was saved for last, though. A band of these flying robots were programmed to play the infamous James Bond theme song, with each quadrocopter performing its own task, whether it was hitting a note on a  a keyboard, strumming a guitar, or hitting a cymbal or drum. It’s amazing how the robots managed to perform in such a perfectly synchronized manner, all without the slightest risk of collision. This was made possible through the use of infrared lights and cameras that capture the locations of the individual drones. A series of 3D waypoints were set-up by the scientists, like a C-sharp note on the organ, as well as other specific instructions like the number of times that the waypoints (notes) need to be hit.

“The nano quads all have reflectors on their struts, which allows the camera system to plot their exact positions and relay that information wirelessly to each unit. Lab members can then assign each unit a series of waypoints in three-dimensional space that must be reached at an exact time,” the university stated in a press release.

Check out the James Bond theme song flying robot cover below, as well as Professor Kumar’s whole TED presentation. We at ZME are big fans of TED, so consider our heartfelt recommendation to check out the rest of the other amazing TED talks for 2012.

If you’re reading this on the e-mail subscription, check the post online at the site to view the videos.