by Alexandru Micu
in Anatomy, Biology, Discoveries, News, Science, Videos
A A

Using cutting-edge microscopy imaging, researchers discovered — and filmed — the ‘sensors’ macrophage cells use to detect pathogens. The research might also yield one of the most powerful tools to date in the fight against cancer.

Macrophages form the first line of defense in our immune systems, patroling tissues throughout our bodies and guarding the bits susceptible to infection. Once a macrophage encounters something that doesn’t wear the protein tags of healthy human cells — such as cellular debris, pathogens, cancer cells, or foreign substances — the cell wraps around it and proceeds to digest it.

Still, despite decades of research, we still barely understand how macrophages — and their other white cell relatives — work. In an effort to patch our grasp of these mechanisms, a team from the University of Queensland (UQ) used cutting-edge microscopy techniques to film macrophage cells.

Their research led to the discovery of structures known as “tent-pole ruffles”, which underpin the cells’ functions. The same structures, the team writes, may help us find a new and very powerful tool against cancer.

If you can’t beat them, eat them

“It’s really exciting to be able to see cell behaviour at unprecedented levels of resolution,” says co-author Adam Wall, a researcher in molecular bioscience at UQ.

“This is discovery science at the cutting edge of microscopy and reveals how much we still have to learn about how cells function”.

The ruffles are located on the surface of macrophages, a specific type of white blood cell that directly engages pathogens and other undesirables in our bodies. Tent-pole ruffles underpin their function, the team writes, by allowing the cells to sample their surrounding fluids for potential threats.

They take the name from their shape and work similarly to our sense of taste or smell: the ruffles extend from the cell’s body and — using a special membrane strung between the poles — gather relatively large volumes of fluid that are then sampled for chemical markers. This process is known as ‘macropinocytosis’. If any molecules from a foreign entity are detected, the cells move towards the source and prepare to engage.

Tent-pole ruffles are exceedingly small. Their discovery was only made possible by a new imaging technology known as ‘lattice light sheet microscopy’. The technique can capture tiny structures in a matter of seconds, generating stunning 3D renditions with very high precision. 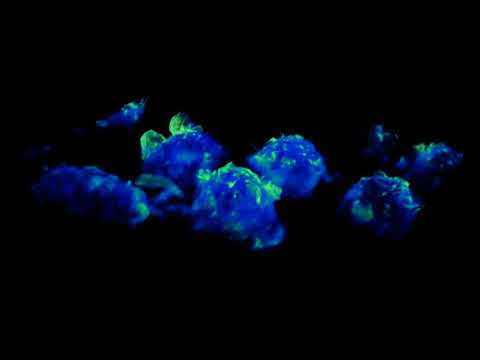 “This imaging will give us phenomenal power to reveal how cell behaviour is affected in disease, to test the effects of drugs on cells, and to give us insights that will be important for devising new treatments,” says study supervisor Jenny Stow, a deputy director of research in molecular bioscience at UQ.

It’s a very fortunate development. The research helps us better understand how our immune systems scrub the body clean of pathogens, but it also points to a way to cripple cancer cells. These latter cells use the process of macropinocytosis to capture nutrients, not to probe their environment like the macrophages. Apart from that, the process works largely the same — tent-pole ruffles extend, the membranes capture field, and nutrients are absorbed.

In theory, then, if researchers can figure out how to destroy or inactivate the tent-pole ruffles of cancer cells, we could simply starve them out.

The team plans to continue using lattice light sheet microscopy to probe the natures of other human immune system cells.

The paper “Macropinosome formation by tent pole ruffling in macrophages” has been published in the Journal of Cell Biology.