by Mihai Andrei
in Physics, Studies
Reading Time: 2 mins read
A A
Share on FacebookShare on TwitterSubmit to Reddit

Xinwei Wang, an associate professor of mechanical engineering at Iowa State studies thermal conductivity – and he had a funny feeling about spiders; so he ordered eight spiders — Nephila clavipes, golden silk orbweavers — and put them to work eating crickets and spinning webs in the cages he set up. 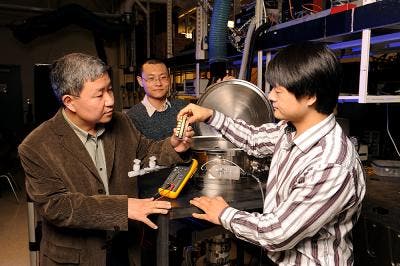 Wang has been looking for organic materials which can transfer heat as effectively – something diamonds, copper and aluminum are very good at, but most organic materials aren’t. However, spider silk has some remarkable properties, including strength and the ability to stretch a lot; it’s these properties that led the professor to guess that it might hold some surprises in thermal transfer as well. So he head on and did the experiments to test his theories – and the results came in fast.

“I think we tried the right material,” Wang said of the results.

What he and the rest of the team found was that spider silks, especially the draglines that anchor webs in place conduct silicone much better than some other materials, including very good conductors, such as silicone or aluminum.

“Our discoveries will revolutionize the conventional thought on the low thermal conductivity of biological materials,” Wang wrote in the paper he published, which is called “New Secrets of Spider Silk: Exceptionally High Thermal Conductivity and its Abnormal Change under Stretching”.

Even more surprising and intriguing was the fact that when stretched, silk increased its thermal conductivity; when they stretched it by 20 percent, the conductivity rose by 20 percent as well. Most materials tend to lose their thermal conductivity when stretched. So what is it that gives it these absolutely incredible properties? According to Wang, it has a lot to do with the defect-free molecular structure of spider silk, including proteins that contain nanocrystals and the spring-shaped structures connecting the proteins. The researchers also suggest artificial improvements might be made to spider silk to improve its conductivity even more – the preliminary results are extremely promising.

“I’ve been doing thermal transport for many years,” Wang said. “This is the most exciting thing, what I’m doing right now.”