Quantum knots tied for the very first time. Why this is important

Finnish and American scientist made knots out of solitary waves, or knot solitons. This was the first time this was demonstrated possible, though theoretically predicted for decades. These sort of knots are thought to play an important role in the quantum-mechanical foundations of nature, though these have remained elusive in quantum dynamics.

by Tibi Puiu
in News, Physics, Science
A A

Finnish and American scientist made knots out of solitary waves, or knot solitons. This was the first time this was demonstrated possible, though theoretically predicted for decades. These sort of knots are thought to play an important role in the quantum-mechanical foundations of nature, though these have remained elusive in quantum dynamics.

The knots we generally think of are typically tied on a rope or string with two ends. These sort of knots are thought topologically stable because the ends of the rope are considered glued together. But quantum knots aren’t because they can be untied without cutting the “rope”.

The quantum knots were made in a rubidium gas of superfluid atoms, also known as a Bose–Einstein condensate (BEC). As I explained in a previous article I wrote about slowing down and trapping light, BEC ” was first predicted in the 1920s by Albert Einstein and the Indian physicist Satyendra Bose and it wasn’t until very late in 1995 that scientists were able to produce the necessary conditions for this extreme state of matter to occur. At room temperature, atoms are incredibly fast and behave akin to billiard balls, bouncing off each other when they interact. As you lower the temperature (remember temperature reflects atomic agitation), atoms and molecules move slower. Eventually, once you get to about 0.000001 degrees above absolute zero, atoms become so densely packed they behave like one super atom, acting in unison. This is the domain of quantum mechanics so prepared for a lot of weirdness.”

The BEC superfluid (flows without viscosity) offered the ripe conditions for a field that assumes a certain direction at every point of space to exist. The field segregates into an infinite number of linked rings, each with its own field direction. The knots made by the researchers at Aalto University (Finland) and Amherst College (USA), however, are solitons — waves that that roll at a constant speed without changing shape. If all points in the magnetic field point up, the points forming the knot point down. “If you followed the magnetic field line, it would go toward the center, but at the last minute it would peel away into a perpendicular direction,” said  David Hall, a physicist at Amherst College for Gizmodo. “It’s a particular way of rotating these arrows that gives you this linked configuration.”

“For decades, physicists have been theoretically predicting that it should be possible to have knots in quantum fields, but nobody else has been able to make one. Now that we have seen these exotic beasts, we are really excited to study their peculiar properties. Importantly, our discovery connects to a diverse set of research fields including cosmology, fusion power, and quantum computers,” says research group leader Mikko Möttönen, Aalto University.

Möttönen claims the research will prove useful as a starting point for topological quantum computer. Transistors perform logic operations by shuttling bits of data, each assigned a value which is either “0” or “1”. That’s how a classical, digital computer works. Quantum computers, however, use qubits or a quantum bit which can simultaneously exist in both states at once – both “0” and “1”. This is known as a superposition, and if scientists can leverage it then information could be processed in parallel. Two-qubits can perform operations on four values, three on eight values and so on in powers of two. Today’s computers have millions of transistors. Now imagine a quantum logic gate that works with millions of qubits. The computing force would be unheard of.

A topological quantum computer would braid the qubits into the knots. The result does not depend on the positions of these things,” said Möttönen. “If you move them around a little, it doesn’t matter, so [such a computer] should be really robust against any error.”

“This is the beginning of the story of quantum knots. It would be great to see even more sophisticated quantum knots to appear such as those with knotted cores. Also it would be important to create these knots in conditions where the state of the quantum matter would be inherently stable. Such system would allow for detailed studies of the stability of the knot itself,” says Mikko Möttönen. 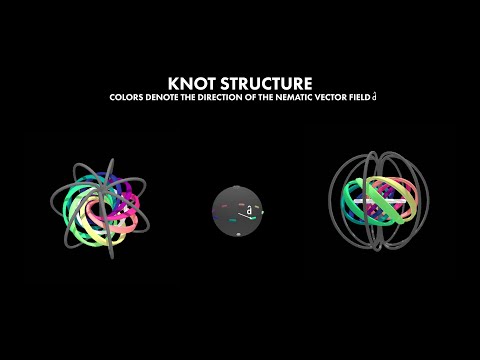