by Mihai Andrei
in Geology, Physics
Reading Time: 2 mins read
A A
Share on FacebookShare on TwitterSubmit to Reddit

Ever since researchers started studying the Earth’s spin, they noticed that the spin isn’t perfect. Many believe this is a result of the different elements in the Earth’s core, mantle and crust, which have different densities and generate different friction. 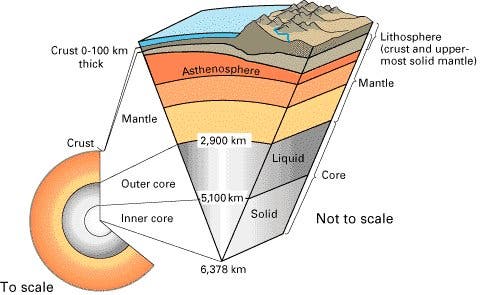 Most researchers studying this wobble agreed that the mantle would have to respond to the magnetic tug of the core – but the problem here is that the mantle is made out of rocks, and not only metals, like the core, and therefore shouldn’t be conductive; hence, quite a predicament. However, new research done by Kenji Ohta and his colleagues at Osaka University in Japan.

As they describe in their paper published in Physical Review Letters, it appears that a mineral called Wustite (FeO), believed to be a significant component of the Earth’s mantle, can be made to conduct electricity at high temperatures and pressures.

In order to test their theory, they raised the mineral up to 1600°C and applying 70 gigapascals of pressure, and they found it becomes just as conductive as an average metal. To find out what happens in even harsher conditions, they heated the mineral to 2200°C and doubled the pressure – finding the same results, suggesting that the same thing would happen even deeper in the mantle, closer to the core-mantle boundary.

In order to better understand why this particular mixture of Oxygen and iron becomes conductive at high pressures, the team did density and electrical conductivity tests and their results seem to suggest that this metallization is related to the spin crossover.