The Oh-My-God particle was an ultra-high-energy cosmic ray (most likely a proton) detected on the evening of 15 October 1991 over Dugway Proving Ground, in Utah. The particle was 20 million times more energetic than the highest energy measured in radiation emitted by an extragalactic object – in other words, this subatomic particle had the energy of a baseball traveling at 100 km/h (60 mph). The energy was measured at 51 joules—enough to light a 40 watt light bulb for more than a second. Utah physicist Pierre Sokolsky likened it to “a brick falling on your toe.” 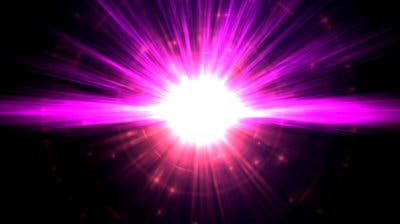 Just imagine, even if it were a billion times larger, you couldn’t see it – and it has the same energy as a baseball at high speed! At first, researchers thought there might be some sort of measuring error, but similar observations were reported at least fifteen times, confirming this extremely rare phenomenon.

So what is emitting this kind of particles? The short answer is “we don’t know”. The longer answer would be – probably the nucleus of an active galaxy, jets emitted by nucleus, or exotic decay processes. Basically, this particle is an ultra-high-energy cosmic ray (UHECR), or to be more precise, an extreme-energy cosmic ray (EECR) – that’s how astrophysicists call them, don’t blame me. But it gets even better – whatever the source of these particles is, it’s called a Zevatron. As I said, we don’t really know what zevatrons are, but the most likely candidate seems to be galactic jets – or at least so a study claimed in 2004.

It is hypothesized that active galactic nuclei are capable of converting dark matter into high energy protons, but this theory is more speculative and exotic – still, it may very well be true.

So, the bad news is we’re still guessing in the dark when it comes to these strange particles; the good news however, is that physics still has a lot of interesting things to figure out.