by Mihai Andrei
in Astrophysics, Physics
Reading Time: 3 mins read
A A
Share on FacebookShare on TwitterSubmit to Reddit

The Moon still holds numerous unanswered questions, and among these, perhaps the most interesting is the one regarding its lost magnetism. Why is it that the Moon had magnetism? Now, two teams working separately seem to have found two complementary explanations. 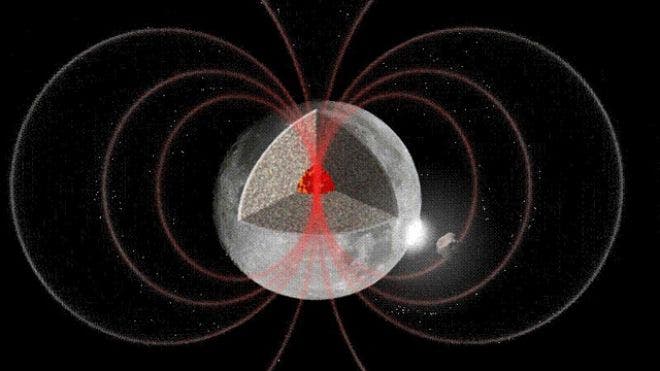 It all started when the Apollo missions brought back samples of moon rocks from their lunar landing missions in the 60s and 70s. Some of these samples absolutely shocked researchers, because they were magnetic – a fact which was totally unexplainable at the moment.

A magnetic field can be generated by a dynamo, which is caused by fluid motion through a conducting material, such as liquid iron, for example. In the case of our planet, this motion occurs in the outer core, caused by the convection currents. However, the Moon isn’t large enough to have such a hot, viscous outer core, so convection doesn’t occur.

In a new proposal, Christina Dwyer of the University of California, Santa Cruz, and her team, suggest that the moon’s mantle, which is a solid-rock middle layer, stirs up the liquid iron core. They believe this happens because the Moon’s mantle and core revolve around slightly different axes, and their boundary isn’t perfectly spherical, so this causes them to mix up here and there.

The degree at which they mix depends on the angle between the core and the mantle, and the distance between the Earth and the moon, due to the gravitational tug that our planet exerts on its satellite. Based on their calculations, the resulting magnetic field would have lasted about 1 billion years, somewhere between 2.7 and 4.2 billion years ago.

“Based on what we know about stirring, and everything we know about fluid motion, we can find no reason that this would not work,” Dwyer said. “All the flags are go, and now this needs to be taken to the next level to get tested.”

Dwyer also expressed the hope that scientists who focus on dynamo modelling step in and explain if this is actually what happened to the Moon.

However, this isn’t the only new theory on the block. In the same issue of Nature, Michael Le Bars of the French National Center for Scientific Research and the Université Aix-Marseille in France with his colleagues suggests another explanation for a lunar magnetic field.

They also believe that the lunar mantle stirred the core, but they believe this was caused by impacts with large bodies which slammed into the Moon and changed its rotation rate, thus creating a discrepancy between its mantle and its core. While both theories have a good chance of being correct, a third option, a combination of the two, is also possible.

“The two studies are thought-provoking and may be complementary,” Dominique Jault, a researcher at ETH Zürich in Switzerland and the Université Joseph-Fourier in France, who was not involved in either new study, wrote in an accompanying essay in the same issue of Nature. “Future palaeomagnetic experiments on samples from very old lunar rocks will enable their theories to be tested.”