Smart ‘curtains’ open and close just by responding to light only

by Tibi Puiu
in Environment, News, Physics
A A

Researchers at University of California, Berkeley toyed around with novel materials and found a way to make them move and twist in response to light. A first application would be smart curtains that simply open or close according to how much light is in the room – no remote, no batteries, no electricity. It uses only the energy it absorbs from incoming light. Ali Javey, associate professor of electrical engineering and computer sciences, and colleagues, layered carbon nanotubes – atom thick rolled up carbon – onto a plastic polycarbonate membrane. When exposed to light, the carbon nanotubes absorb photon energy, part of which gets converted to heat. The rising temperature has no particular mechanical effect on the nanotubes, however the polycarbonate layer expands in response twisting and bending.

“The advantages of this new class of photo-reactive actuator is that it is very easy to make, and it is very sensitive to low-intensity light,” said Javey, who is also a faculty scientist at the Lawrence Berkeley National Lab. “The light from a flashlight is enough to generate a response.” 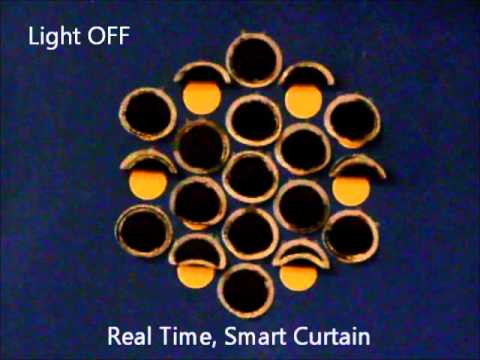 The researchers tweaked the size and chirality – referring to the left or right direction of twist – of the nanotubes to make the material react to different wavelengths of light. Eventually, the researchers made their combo material respond to artificial light at the flick of a switch.

“We envision these in future smart, energy-efficient buildings,” said Javey. “Curtains made of this material could automatically open or close during the day.”

Besides energy-friendly curtains, the researchers also envision other possible applications like light-driven motors and robotics that move toward or away from light, the researchers said. The novel materials were reported in a paper published in the journal Nature Communications.