by Mihai Andrei
in News, Physics
Reading Time: 2 mins read
A A
Share on FacebookShare on TwitterSubmit to Reddit 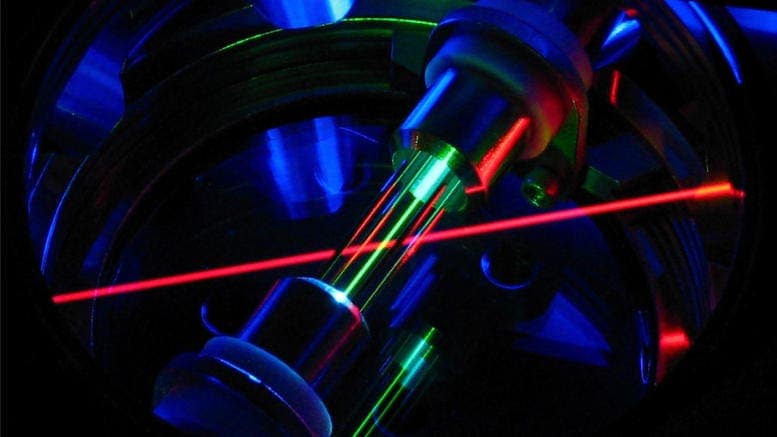 Researchers working in the Greek island of Crete have developed the world’s most powerful atom laser – fully seven times stronger than any developed to date.

Optical lasers not really top notch technology anymore, but atom lasers are relatively new – the first one was demonstrated in 1996 at MIT. But like an optical laser emits photons in a coherent fashion (behaving like a wave), the atom lasers emits atoms (heh). To be more specific, it emits from a ultra-cooled Bose–Einstein condensate of atoms. Other than that, the physics of the device is rather similar to its optical counterpart. The main differences are that unlike the photons, atoms interact with themselves, cannot be created as photons can, and move at speeds slower than the speed of light (therefore possessing mass).

Aside for being a spectacular technical achievement in itself, atom lasers also have important potential applications. The most exciting one is perhaps a matter–wave interferometer, where the wave-nature of the atoms will be exploited to make ultra-accurate measurements of gravitation or rotation or to probe the magnetic and electric properties of surfaces.

There are currently about a dozen of atom lasers in the world right now (I couldn’t find the exact number anywhere). The one in Crete was developed by a team led by German physicist Wolf von Klitzing at the Institute of Electronic Structure and Laser at the Foundation for Research and Technology (FORTH). This facility also focuses on developing new materials and computational physics. However, since this technology is still in its early stages, there are still many problems left to solve – and this laser will definitely contribute to that.