by livia rusu
in News, Renewable Energy, Science
Reading Time: 2 mins read
A A
Share on FacebookShare on TwitterSubmit to Reddit

Electric vehicles started to rise in popularity, but we’re clearly not ready to make such a huge change at once, especially concerning the steady supply of energy that would have to come along with introducing them into massive production and consumption. Scientist Neville Mars has come with a great EV charging station which takes the form of an evergreen glade of solar trees.

The concept of solar tree is both functional and has a pleasant design, looking like a decorative element. The tree’s modular sculptural look is created by detachable parts of the tree’s branches. Part of the innovativeness of the design includes enough room for the gadgets to lay in the shades of the ‘leaves’ during their charging process. The great part about the plant’s photosynthesis is that the Photosyntheses tree doesn’t require any watering, while it completely sustains the gadget by exploiting the power of the sun. 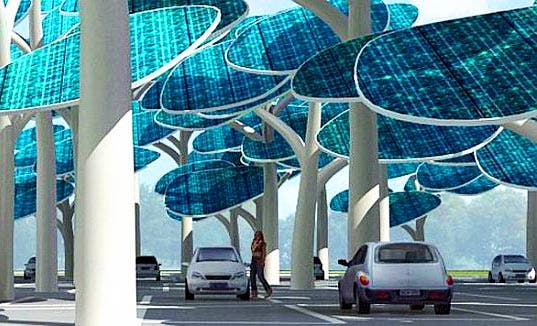 The trees in his scientific approach are quite practical – a set of photo voltaic leaves have to be mounted on a branching poll, and the base of each trunk would require a power outlet to be used in order to supply any Eco ride. The idea of the leaf design comes from the attempt to shade as little of the surface as possible, while being able to sustain the entire mechanism on the structures. In order for the leaves to ensure maximum efficiency, they rotate with the sun. The solar forest isn’t only a huge step for the scientific environment, but it’s an important source of inspiration for the attempts of integrating solar technology with natural forms. 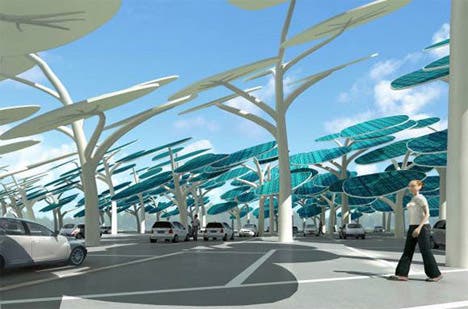 The whole ides of the leaves comes from the premises that it should soon be possible to replace the streetlights from during the night with brightened light-laden boughs of luminous leaves. The lamps would wind around the branches and will integrate into their environs for a better effect.