by Mihai Andrei
in Oceanography

The natural world sometimes has a magnificent way of dealing with its own problems – and this is exactly the case here. Coral threatened by toxic seaweeds emit a chemical signal which draws fish to eat away the danger. 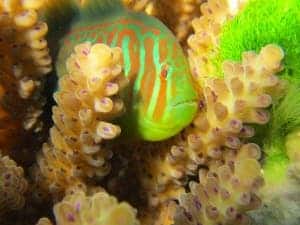 When Acropora nasuta corals come into contact with the toxic seaweed Chlorodesmis fastigiata, they scream for help; but they don’t use sounds; instead, they emit a chemical signal that attracts the “bodyguards”: inch long gobies, fish that live in the crevices and “outskirts” of the corals. According to Mark Hay, of the Georgia Institute of Technology in Atlanta. Hay and his colleague Danielle Dixson, the gobies were summoned minutes after the threat appeared.

Working in the Fiji, they noticed a 30% drop in seaweed abundance, in only three days after the gobies were summoned. But other fishy residents of the coral reef weren’t so helpful. Damselfish had an entirely different approach, but still one conditioned by the chemical signal: when they “heard” the call, they simply abandoned their homes within 48 hour – talk about your scumbag citizen.

“The neighbourhood is going to hell, we’re out of here.” – what a damselfish probably says when it receives the signal.

“The sensory basis for ecological interactions remains enigmatic, especially in marine habitats,” says Richard Zimmer, who studies chemical signalling between organisms at the University of California, Los Angeles. “This research by Dixon and Hay bridges the gap” between cause — in this case the chemical signal — and the effect on the ecosystem.