Tyrannosaurs may have had unexpectedly sensitive faces.

T-rex is one of the most recognized dinosaurs but a lot about what the ferocious predator must have looked like is just assumed. A newly discovered T-rex species might help shed some light after researchers found fossils which revealed the dinosaur’s facial features. Briefly, it seems T-rex and relatives had faces that looked more like that of a crocodile’s than a lizard.

The fossils were dug out of the muddy banks of a Montana river, an area famous for its richness in dinosaur fossils. University of New Mexico paleontologists led by Professor Jason R. Moore were impressed by the well-preserved features which enabled them to make a detailed facial analysis. They conclude that the tyrannosaur’s face was covered in a scaly protective layer which had a high degree of tactile sensitivity.

The dinosaur called Daspletosaurus horneri or “Horner’s Frightful Lizard” in honor of renowned dinosaur paleontologist, John “Jack” R. Horner, had no lips. Its face was covered with small patches of armored skin, along with the sensitive flat scales. On each side of the head, a large horn rested which may have been covered in keratin, the fibrous protein that fingernails are made of. Its snout and jaw were likely packed with nerves to make the skin supersensitive, not too different from a human fingertip. Throughout the snout and jaws, tiny holes could be found very similarly to those that appear in crocodiles. These holes, known as foramina, house hundreds of trigeminal nerves, special nerves which allow modern animals like the pit viper to detect infrared radiation or help birds navigate over long distances.

This conclusion results from comparing tyrannosaur skulls with those of crocodylians, birds, and mammals, as well as earlier published work done by other researchers who had matched bone texture with different types of skin.

Having a sensitive skin on the face must have aided the tyrannosaur in hunting. The dinosaur’s feeble arms may have had a word or two to say about the evolutionary direction of the sensitive skin.

“Being a tyrannosaur, they had really small arms,” says Moore. “They wouldn’t be able to interact with their environment with their hands the way mammals do — find food, build nests, tend to eggs and young. In order to do these things, Daspletosaurus needed to use its feet or head.” 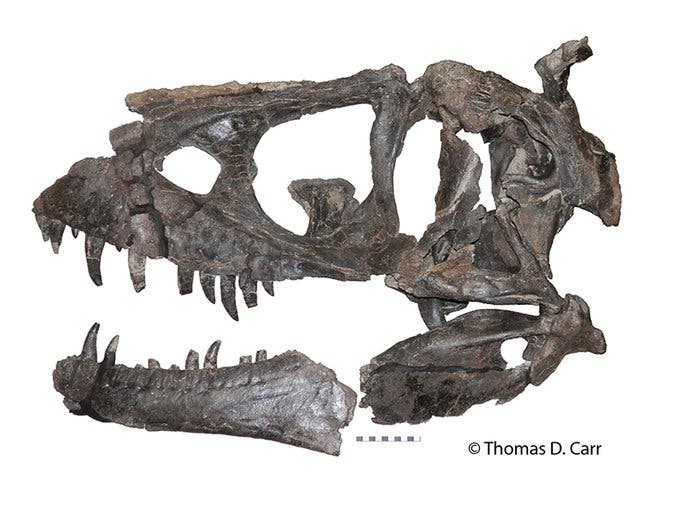 The newly added species to the tyrannosaur family tree is the youngest and last of its lineage, having evolved from its closest relative D. torosus over a span of 2.3 million years. The dinosaur roamed present-day Montana some 75.2 to 74.4 million years ago.

The biggest implication of the new study published in Scientific Reports, however, is putting a face on a dinosaur. Fossilized facial skins are among the rarest since the skin is one of the first parts to get scavenged or eroded after a dinosaur dies. There would have been no other way to find out that tyrannosaurs turned their entire faces into finely tuned sensory organs.