Scientists figure out how turbulent fluids make order from chaos

by Mihai Andrei
in News, Physics

For decades, physicists have been puzzled by fluids’ tendency move from disordered chaos to perfectly parallel patterns of oblique turbulent bands. This state, which has been observed numerous times, was not explained for the first time. 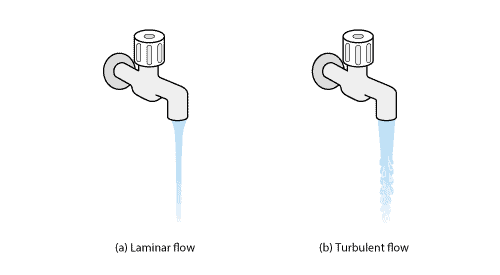 Although the general equations describing fluid flows are well-known, they are far from being simple. These equations, which describe most situations, are taught to physics and engineering students from all around the world — fluid dynamics is the kind of stuff that makes undergrads cry. But when things get really messy, it can leave even experience researchers scratching their heads.

For instance, when fluids become turbulent, the solutions to the equations become nonlinear and complex — chaotic, like the fluid they are describing. It’s often impossible to describe how such a turbulent fluid will evolve, especially in a longer period of time. However, physicists have observed that such a chaotic system tends to order itself, creating a structured pattern of turbulent and laminar bands.

Essentially, when a fluid is placed between two parallel plates which move in opposite directions, it creates turbulence. After a while, this initially chaotic turbulence forms types of oblique bands: some turbulent, and some calm. No known mechanism could explain this behavior or determine physical parameters such as the periodicity of this phenomenon. In his landmark physics lectures, Richard Feynman highlights this unexplained stripe pattern as an example demonstrating the need for improved theoretical tools to analyze the fluid flow equations. Intriguingly, Feynman proposed that we don’t really need new mathematics to solve this issue, we just need a different way to look at things.

A new study proved Feynman right and found why these flows form.

“As the physicist Richard Feynman predicted, the solution was not to be found in new equations, but rather within the equation that was already available to us,” explained Tobias Schneider, author of the new study. “Until now, researchers didn’t have powerful enough mathematical tools to verify this.”

Researchers used a tool called dynamical systems theory, an area of mathematics used to describe the behavior of the complex dynamical systems. They described the step-by-step behavior, calculating the equilibrium breaking points for each step. With this computationally intensive approach, they were able to explain the transition from the chaotic to the structured state.

“We can now describe the initial instability mechanism that creates the oblique pattern,” explains Florian Reetz, the study’s lead author. “We have thus solved one of the most fundamental problems in our field. The methods we developed will help clarify the chaotic dynamics of turbulent-laminar patterns in many flow problems. They may one day allow us to better control flows.”

In addition to solving a fundamental fluid mechanics problem, this doesn’t only apply to a lab setting — it could also enable researchers to better understand fluid flows in nature, designing more efficient systems to control flow-related phenomena occurring in nature.

The study has been published in Nature Communications.