Actually, it is time to talk about gun violence — and science has a lot to say

The US suffers mass shootings at more than 11 times the rate of any other developed country.

by Mihai Andrei
in News
Reading Time: 8 mins read
A A
Share on FacebookShare on TwitterSubmit to Reddit

As the White House insists that now is not the time to talk about gun control, it’s important to remember that there’s a lot of science on the matter.

‘No Way To Prevent This,’ Says Only Nation Where This Regularly Happens

Every time a mass shooting like the one in Vegas takes place, The Onion posts a satirical article with the title you see above. I say “every time” because, in the US, this happens depressingly often. Since the Orlando shooting in June 2016, there have been 521 mass shootings. That’s 521 instances in 477 days where more than four people were injured or killed — with zero action from Congress. It shouldn’t even come as a surprise, really.

Of course, you can’t talk gun violence without talking about the elephant in the room: gun ownership. There are over 300 million guns in the US, with 112.6 guns per 100 residents according to one estimate, a figure that is continuously growing. The closest number is 58.21, in Serbia. It’s not even close. In fact, you have to go down to Finland to find a developed country.

There are 34.2 guns per 100 residents in Finland, which is largely explained by two aspects: firstly, military conscription is still mandatory for men, and most have at least some basic firearm training. Many get to take their guns home after training. Secondly, Finland is a nation of hunters. With much of the population living in close proximity to the woods, many Finns have a hunting permit and use it regularly. Just 3.25 out of 100,000 Finnish people are killed by gun-related violence, compared to 10.54 in the US. Furthermore, out of those 3.25 fatalities, 2.94 are suicides. Finland certainly has its own problems, but gun-related violence isn’t one of them.

This is where the brilliance of The Onion’s title really shines. Overall, the rate of legal firearms ownership in Finland is comparable to countries such as Sweden, France, Canada, and Germany. None of those countries have a gun problem, not on the scale that the US has. The US is the only country where things are happening at this level, and it’s not doing anything to solve things.

The science is in

This is where responsible policymakers would take a step back and look at what the research says. Thankfully, there are quite a few studies on the matter.

Thankfully, a 2016 study, published in the academic journal Epidemiologic Reviews reviewed 130 high-quality studies conducted in 10 countries over the past 60 years. This is one of the largest reviews ever carried out in the field. While the situations were very diverse and authors were cautious in announcing their conclusions, it was evident that reducing gun ownership significantly reduces gun violence.

“Across countries, instead of seeing an increase in the homicide rate, we saw a reduction,” lead researcher Julian Santaella-Tenorio from Columbia University told Zack Beauchamp over at Vox.

They came up with three major conclusions.

Gun violence is often a complex issue. Laws and social circumstances vary from place to place, which is why it’s hard to find something that works everywhere. However, researchers did highlight three things which seem to work across all populations:

A great example here is South Africa. In 2000, the country passed a Firearm Control Act, containing all three of these measures. One study found that firearm homicides in five major South African cities decreased by 13.6 percent per year for the next five years. South Africa still has a big problem, but things were improved significantly.

Thankfully, there’s also a great real-life case-study here: Australia. The country confiscated 650,000 guns and as a result, murders and suicides plummeted. In Santaella-Tenorio et al. reviewed eight studies on this case, finding a clear evidence between reduced gun ownership and reduced violence. In 1996, a 28-year-old man with a troubled past opened fire with a semi-automatic rifle in Tasmania. Australia quickly realized they have too many guns, and it’s too easy to get new ones, so they basically confiscated 650,000 of them, making background checks on new guns much stricter. Automatic and semi-automatic guns were simply banned. The gun owners were given a fair price in a massive buyback program. 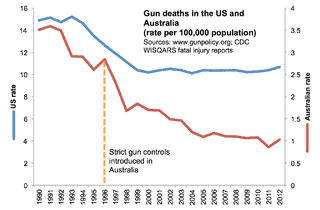 While other areas didn’t have an action of this scale, similar trends were observed in many parts of the world.

Which leads us to number three:

At this point, you might make an argument that the science just isn’t settled — we need more evidence before we can do one thing or another. Well, one might ask himself why there isn’t more science done on this in the first place, especially funded directly from the state?

Well, this has a lot to do with a 1996 appropriations bill, appropriately called the Dickey Amendment. The amendment declared that “none of the funds made available for injury prevention and control at the Centers for Disease Control and Prevention (CDC) may be used to advocate or promote gun control.”

The amendment was introduced following lobbying by the National Rifle Association (NRA) after what they believed to be a bias in a 1993 study by Arthur Kellermann that found that guns in the home were associated with an increased risk of homicide in the home. Kellermann’s work showed an increased risk of mortality associated with gun ownership and was published in the New England Journal of Medicine, a high-profile peer-reviewed publication. The study withstood thorough scrutiny, yet the NRA felt it was biased, so they did what most powerful organizations do: they lobbied. They pushed money and influence until the Dickey Amendment was passed.

Although not technically a ban, it effectively functions as a ban on gun violence research. Furthermore, it brought a stigma associated with studying gun-related violence. Garen Wintemute, a researcher at the University of California, Davis, told The Atlantic, “I’ve received death threats. It kind of comes with the territory.”

Mark L. Rosenberg, the former director of the National Center for Injury Prevention and Control, has described this amendment as “a shot fired across the bow” at CDC researchers who wanted to research gun violence. Many researchers say they aren’t getting any funding at all to study this, or their resources are extremely limited. Even Jay Dickey, a Republican from Arkansas, has said he regrets his role in stopping the CDC from researching gun violence, saying he simply didn’t want to “let any of those dollars go to gun control advocacy.” In 2013, President Barack Obama signed an executive order calling for the CDC to resume gun violence research, but with the amendment still in place, the prohibition stood.

So stop a moment to consider this. The National Rifle Association of America lobbied against researching gun control because they were “worried of bias.” So instead of understanding things, let’s just poke our head in the dark. Their lobby is successful — Congress agrees that it’s better to not know if gun control works or not. Things get worse year after year, and after all this time, Congress never repealed the amendment. Even after 110 members of Congress (all Democrats) signed a letter calling for a repeal, Congress refused.

“We dedicate $240 million a year on traffic safety research, more than $233 million a year on food safety and $331 million a year on the effects of tobacco, but almost nothing on firearms that kill 33,000 Americans annually,” the lawmakers wrote in a letter. “The result is a lack of fundamental research on gun violence, gun safety, and what public policy measures will effectively stem the tide of gun deaths.”

So if now is not the time to talk about gun control, then when is? The White House statement is insulting — it’s insulting to the Vegas victims, and it’s insulting to future victims. Make no mistake, there will be future victims, and we’ll be discussing the same thing over and over again, on the background of Congress not doing anything. You can excuse people for trying to find a solution and not being able to. But for not even trying? That’s simply unacceptable.