This salty lake beneath the sea just kills everything inside it

They call it the "Jacuzzi of Despair" and rarely has a name been so fitting.

They call it the “Jacuzzi of Despair” and rarely has a name been so fitting.

The ocean can be a very dangerous and surprising place, and sometimes, the water itself is the enemy. Deep beneath the Gulf of Mexico, at about 3,300 feet below the surface (1 km), there’s a lake. Yes, you read that right, there’s a lake in the ocean. But this isn’t just any lake — it has a crazy high salt content, as well as dissolved methane. This means that any critter unfortunate enough to fall into it is killed almost immediately.

Erik Cordes, associate professor of biology at Temple University, has discovered and studied the pool.

“It was one of the most amazing things in the deep sea. You go down into the bottom of the ocean and you are looking at a lake or a river flowing. It feels like you are not on this world”, Cordes told Seeker. 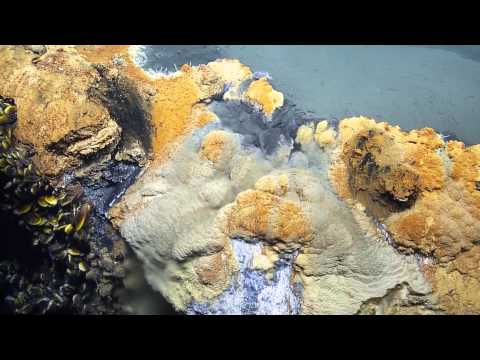 The lake measures 100 feet in circumference and is about 12 feet deep. It was likely formed when fissures in the seafloor allowed the water to seep in and mix with salt. Then, as it interacted with the methane, it started to flow again to the surface, maintaining its salt content. The brine, now four or five times saltier than the water around it, is so dense that it stays on the bottom forming the lake.

Cordes first identified the lake in 2014, when he and his colleagues were studying the area with a remotely operated underwater robot called Hercules. They were tipped by the numerous carcasses around the lake.

“We were able to see the first opening of a canyon,” Cordes says. “We kept up this steep slope and it opened up and we saw all these mud flows. We got closer and we saw the brine falling over this wall like a dam. It was this beautiful pool of red white and black colors.”

You might be asking what sea creatures are doing around the lake anyway – if anything, you’d expect them to keep as far away as possible. The thing is, some creatures do survive in the lake: specially adapted bacteria, shrimp and tube worms thrive in these hellish conditions. There’s a chance that these creatures might attract others, which then succumb to the Jacuzzi of Despair.

Another interesting point is that extraterrestrial life might survive in conditions similar to this. Places like Europa might very well host underwater life in places with high salinity and organic substances.

“There’s a lot of people looking at these extreme habitats on Earth as models for what we might discover when we go to other planets,” Cordes says. “The technology development in the deep sea is definitely going to be applied to the worlds beyond our own.”

This isn’t the world’s only underwater lake by any chance. There are several underwater lakes, especially in the Gulf of Mexico region; they’ve got their own shores and all. The brine water of these lakes actually hosts unique wildlife, creating an absolutely amazing environment.