Marine creatures hear us when we scuba dive, kayak, and even swim

Shh, swim lightly -- the animals can hear you.

by Mihai Andrei
in Animals, News, Physics
Reading Time: 4 mins read
A A
Share on FacebookShare on TwitterSubmit to Reddit

We’ve known for quite a while that underwater creatures can pick up sounds from boats and water vehicles, but can they sense when we do subtler things, like swim or scuba dive? A new study suggests so — humans make a lot of noise underwater because we generate and push bubble clouds underwater, which vibrate and send out acoustic waves. 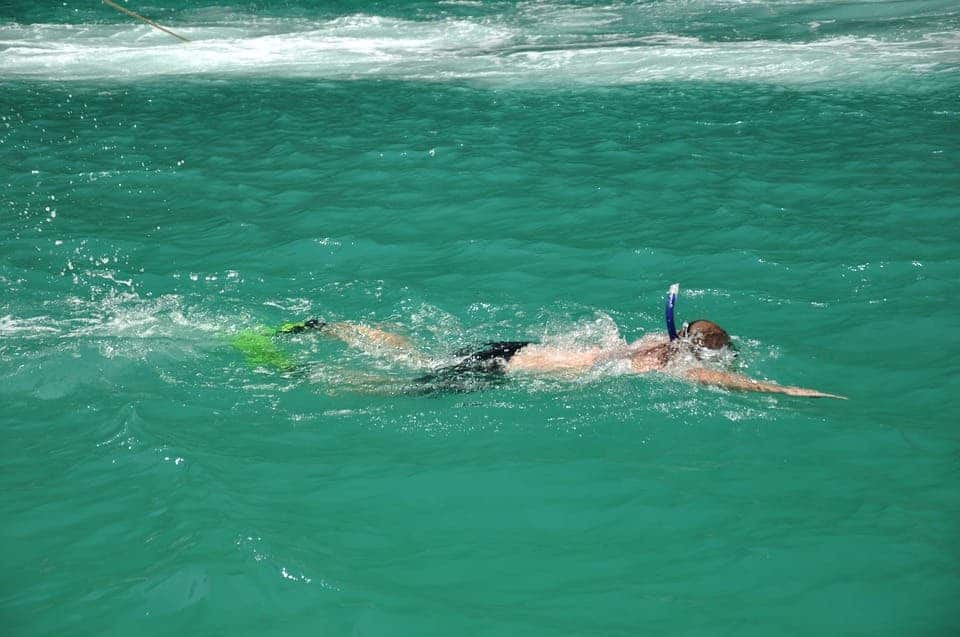 While some of us like the water more than others, humans are certainly not water creatures — the moment we take to the water, things start to get a bit weird. Aside from being sluggish and ill-prepared for the marine environment, we also make a lot of noise.

Christine Erbe, director of the Centre for Marine Science & Technology at Curtin University in Perth, Western Australia, wanted to see just how much noise we make underwater, and whether or not that noise can be picked up by underwater creatures.

“Humans generate underwater noise the moment we take to the water,” said Erbe, who studies big sources of underwater sound on behalf of industry and defense. She also said that out of general scientific curiosity she wanted to find out just how loud we are individually. “Many people don’t realize that sound travels extremely well and far underwater — we can hear individual ships tens to hundreds of kilometers away. And when we’re out on the ocean, we can hear ships coming long before we finally see them appear on the horizon.”

Man-made underwater noise is a serious concern because many marine creatures rely on sound for major functions such as hunting, mating, or avoid being eaten by other predators.

Man-made noises can interfere with these processes, with severe consequences, so researchers wanted to see just to how much noise we make through simple activities, like swimming. They arranged a fairly simple but efficient setup.

“To understand how much interference we cause marine animals, we need to measure the sounds we generate underwater,” Erbe said. “To do this, we deploy hydrophones — essentially underwater microphones — to record the sounds of passing ships or, as in this study, people swimming over the hydrophone.”

[panel style=”panel-default” title=”Water sounds” footer=””]Sound is essentially a sequence of pressure waves which propagates through compressible media such as air or water. Because of the physical differences between water and air, frequencies are attenuated differently in the two environments. Low frequencies particularly can travel long distances in water, which partly explains why whale songs can travel such wide distances.

Dolphins and other toothed whales are known for their acute hearing sensitivity, though most marine creatures have a very fine sense of hearing, adapted to the underwater conditions.[/panel]

Erbe and colleagues were surprised to discover just how noisy humans are underwater. Some swimming styles are noisier than others (for instance, breaststroke is much quieter than freestyle), but overall, all activities commonly carried out in the water created a lot of noise. Even something as simple as snorkeling created easily recognizable sounds.

“Thanks to simultaneous underwater video and audio recordings, we were able to match specific sounds with activities — including different swimming styles, diving, kayaking and scuba diving,” she said. “It turns out, most of the sound is related to bubbles that we generate at the water’s surface. Every time your arms pierce the surface while swimming freestyle, you push a bubble cloud underwater, which vibrates and sends out an acoustic wave.”

You can listen to some examples below. Try to see if you can spot the individual activities without looking at the video, and then see if you were right or not.

Sounds recorded with hydrophones underwater while people swam freestyle and breaststroke, snorkelled, scuba-dived, kicked a boogie board and a surfboard, kayaked, and simply jumped into the water. The scientific data analysis and characterisation and quantification of sound signatures were published in Acoustics Australia.
However, researchers report, while underwater creatures can almost definitely hear us, they’re probably not disturbed by it. In other words, although sound from nonmotorized water sports can likely be heard by nearby animals, it’s most likely not going to do any damage to them.

Results will be presented at the 175th Meeting of the Acoustical Society of America, which will be held May 7-11, 2018, in Minneapolis, Minnesota.