The gentle giants of the oceans take good care of their offspring.

by Mihai Andrei
in Biology, News, Oceanography
A A

It’s a question that’s long been haunting researchers, and only now starting to unravel.

Stewart, who had been studying these magnificent creatures for a long time, had only seen one or two juveniles in his study, but all that changed when conducting research on manta population structure at Flower Garden Banks Marine Sanctuary.

“The juvenile life stage for oceanic mantas has been a bit of a black box for us, since we’re so rarely able to observe them,” said Stewart, who also serves as executive director of the Manta Trust, a global manta conservation program. “Identifying this area as a nursery highlights its importance for conservation and management, but it also gives us the opportunity to focus on the juveniles and learn about them. This discovery is a major advancement in our understanding of the species and the importance of different habitats throughout their lives.”

These rays are large, plankton-eating creatures that live in the open ocean. Reaching wingspans of up to 7 meters (23 feet), they’re often called the gentle giants of the sea. But because they live so far from the shore, studying them has been notoriously difficult. Spotting juveniles is even more difficult. Remember when we said Stewart had only seen a couple of juveniles? Compare that to the over 100 adults he’s seen, and you’ll start to understand the disparity. 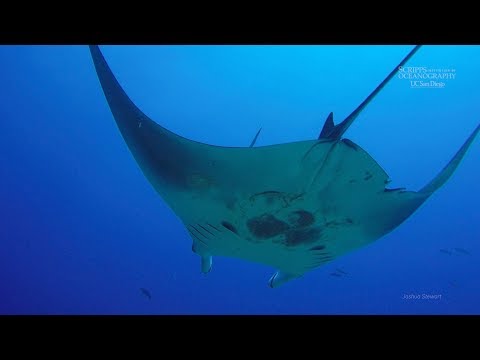 But in the Flower Garden Banks sanctuary, things were exactly the opposite: 95% of the mantas there are juveniles, with a wingspan of only 2.25 meters (7.38 feet). Nowhere in the world has this been observed.

It’s unclear why the rays developed this type of behavior or why they chose Flower Garden Banks, but it may be because it’s an area where the seafloor slowly dips into the deep water, and it’s also rich in zooplankton, which the rays feast upon.

Manta rays are very slow procreators. They have a typical lifespan of about 40 years, and they only become sexually active at the age of 10. Gestation is also lengthy, taking between 10 and 14 months, after which the females give live birth to just one pup — so it’s understandable that they go to great lengths to protect their young.

However, because the pups are so important, researchers were expecting aggregation sites to be farther away from coastal areas. From a conservation perspective, this could have massive implications