Dealing with invasive species is one of the challenges that accompanies globalization and in many areas of the world, it's becoming harder and harder to tackle this issue. In the Colorado lake, 3,000 Koi fish (Japanese carp) are now swarming the water, wiping out native species and dramatically altering the environment.

by Dragos Mitrica
in Biology, News
A A

Dealing with invasive species is one of the challenges that accompanies globalization and in many areas of the world, it’s becoming harder and harder to tackle this issue. In Teller Lake, Colorado, 3,000 Koi fish (Japanese carp) are now swarming the water, wiping out native species and dramatically altering the environment. 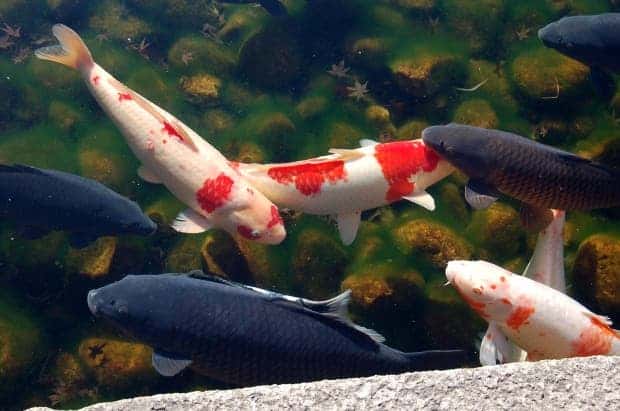 “These are domestic fish actually.These are fish from a store I imagine. They can out-compete the native fish. They may need to drain the lake to remove the goldfish or using electro fishing, where they stun the fish and remove the invasive species. Goldfish are not a native species and are very harmful to the local aquatic ecosystem,” district wildlife manager for Boulder, Kristin Cannon says. “We strongly encourage the public not to dump their unwanted pet fish in our waters. It is bad for our environment, as well as illegal.”

It’s not clear why, when and how the fish popped up in the lake – the explosion of these exotic fish which are not native to North America seems to have occurred three years ago, and authorities suspect that a local pet store is responsible. The fact that all the fish seem to be some three years old seems to be telling for that aspect.

“Based on their size, it looks like they’re 3-year-olds, which were probably produced from a small handful of fish that were illegally introduced into the lake,” Ben Swigle, a fish biologist at the Colorado Parks and Wildlife (CPW), told Live Science.

It should already be well known that dumping fish or any foreign species into a natural environment is forbidden – the consequences can be disastrous. A local ranger estimates that there are now 3-4,000 alien koi fish swimming in Colorado Lake at the moment. As their numbers grow more and more, they will out-compete the local species and potentially drive them out, altering the entire ecosystem.

But even as the fish are successful in taking over the lake, their fate seems to be grim as well. Most of them will likely end up as food at a raptor rehabilitation program. Some residents have contacted park officials, asking to adopt some of the fish, but their requests have been denied so far. It’s not clear exactly what will be done with all these fish.

This isn’t the first time such fish have turned up in high numbers in the area. According to LiveScience, in 2012, some 2,275 koi goldfish had to be removed from Thunderbird Lake in Boulder, after a few were likely dumped there as “unwanted pets” two to three years earlier.