by Dragos Mitrica
in Biology, Environment, News
A A

An invasive ant has been sweeping through southeastern United States; it has a jaw like a bear trap, which close faster than almost anything in nature. Naturally, it packs quite a sting, and if that wasn’t enough, it can propel itself through the air like a rocket.

That amazing jaw is so powerful that you can use it as a surgical staple (when adequate medical equipment is lacking). Especially in military situations, these ants can be quite useful in suturing wounds. But more often than not, their interactions with humans are not pleasant.

There are four species of trap-jaw ants native to the United States, and one of them was the focus of this research.  Odontomachus haematodus is especially aggressive. The species is  found in the tropics and subtropics throughout the world, but in the past 50 years it has grown its populations more and more in the US Gulf Coast. So what changes in the past half century ?

Sorger says population growth and climate change paved the way for this invasion, but the magnificent jaws also helped.

“Trap-jaw ants have little sensory hairs on the inside of their jaws,” said Sheila Patek, a biologist who studies the evolutionary mechanics of movements at Duke University. Patek explained that these hairs are linked directly to the muscles that hold the jaw open. “So they can fire those latch muscles even faster than their brain can process.”

Hey, and as if having one of the strongest bites (per size) in the animal kingdom wasn’t enough, the trap-jaw ants can actually bite the ground with so much strength that it propels them into the air – like popcorn from a frying pan. When a whole army of invasive ants does this at once, it can get a little scary. 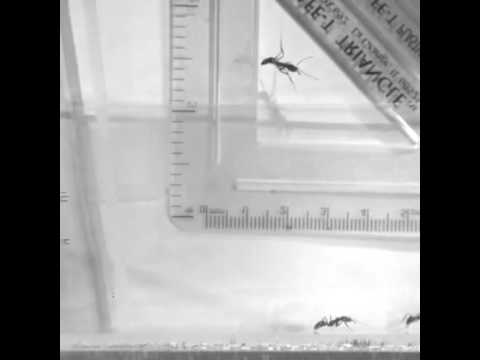 “The next thing you know you have this ant flying through the air that you can’t even see, it’s moving so fast, with a big stinger on the end of its abdomen,” she said. “It is really nerve-racking working with them.”

The good thing is that unlike other invasive ants, these ones don’t have colonies, and therefore there’s a much reduced chance of them overwhelming the local flora and fauna – but that doesn’t mean that they won’t have a huge impact. They’re here, and we should be prepared for it.