The world’s richest 62 people are as wealthy as half of the planet, report finds

by Alexandra Gerea
in Economics, News
A A

According to a new report published by antipoverty advocacy group Oxfam International, the 62 richest people in the world are worth as much as the poorest 3.5 billion people in the world. While the report was not published validated by any scientific journal, the broad point it raises is certainly valid: income inequality is at its highest. 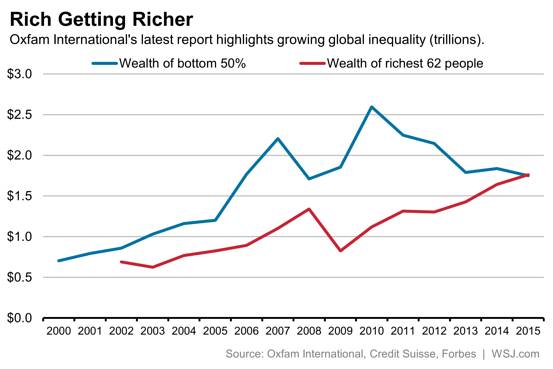 The gap between the rich and the poor is wide and ever-growing. Income inequality represents the disparity between the economic status of the two groups, and it represents a growing problem, both globally and locally; the US is one of the countries with the highest income inequality. With this in mind, Oxfam set out to see just how wide this gap is.

“It’s irrefutable there’s extreme wealth inequality in the world,” said Nick Galasso, a senior researcher at Oxfam America.”What’s alarming is this trend seems to be getting worse.”

“Power and privilege is being used to skew the economic system to increase the gap between the richest and the rest,” the latest Oxfam report said. “The fight against poverty will not be won until the inequality crisis is tackled.”

However, while the figures indicate an evident problem and the growing income inequality is one of this century’s harshest economic problems, I wouldn’t fully rely on the exact figures presented by Oxfam. The organization has been criticized for its methodology and some specific findings and as mentioned before, this report isn’t held accountable through scientific method.

But the broader point remains the same. A very low number of people control as much wealth as the majority of the poorest. That’s bad because this income difference is associated with higher rates of health and social problems, and lower rates of social goods, a lower level of economic utility in society from resources devoted on high-end consumption, and even a lower level of economic growth when human capital is neglected for high-end consumption.