We finally get to see the Lexus hoverboard in action

by Henry Conrad
in News, Technology
Reading Time: 2 mins read
A A
Share on FacebookShare on TwitterSubmit to Reddit

After 2 months of speculation and unanswered questions, we finally get to see Lexus’ hoverboard in action – yes, it’s a real hoverboard, and it works. It’s not Back to the Future, but it’s cool, and it’s here. No CGI, no fakery.

As it turns out, riding this hoverboard is no easy feat. Professional skater Ross McGouran took plenty of spills even trying to do the simplest of movements, and it seems like it takes quite a lot to master it. So the future’s here, we have hoverboards… but how does it work? 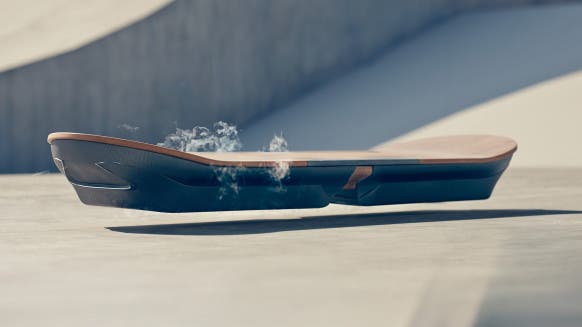 Well, the technology is similar to Maglev trains. Lexus actually hired a group of maglev train researchers to design it, and everything relies on magnets. Maglev trains are a transport method that uses magnetic levitation to move vehicles without touching the ground. With maglev, a vehicle travels along a guideway using magnets to create both lift and propulsion, thereby reducing friction by a great extent and allowing very high speeds. However, with this Lexus technology, if you use enough magnets, you’re not limited to a track and you can use it everywhere you want. The only issue with this is that it needs to be cooled with liquid nitrogen; the liquid nitrogen is fairly inexpensive, but still – you’d only be able to use it for so long before cooling it again.

There’s also another condition – you need to run it on metal for the magnets to work. If you’ll watch the video closely, you’ll see that McGouran rides it over things with metal. Over most of our cities’ infrastructure, it would simply be an immobile board. Furthermore, the physics behind this design has been known for years, but even a not-very-original, functional hoverboard is still a functional hoverboard. Even if it is just a marketing stunt.

Lexus made a video explaining the physics behind the design: