The test is part of the country's plan to decarbonize the transportation sector.

According to Germany’s Environment Ministry, the country has now officially opened the first electrified highway near Frankfurt. A handful of specially designed trucks by Seimens and Scania are now operating on the 3-mile (5-kilometer) stretch of eHighway, powered by overhead cables. In the future, Germany hopes to cover thousands of kilometers of its highways with electric lines in a bid to make transportation in the country climate neutral.

“We have traffic growth, our economy lives from transport and that is why it is important to push ahead with innovative solutions,” said Rita Schwarzeluehr-Sutter, parliamentary state secretary at the ministry.

The short electrified stretch on the Autobahn (motorway) 5 between Darmstadt and Frankfurt will operate in both directions until 2022 when the test will end. All the electricity for the hybrid electric-diesel trucks comes from renewable energy.

An electric highway is now powering delivery trucks in Germany – Heavy-duty trucks powered by electricity from overhead lines are now motoring along a highway in Germany. The system has already been tested in several countries, but the latest setup covers the longest stretch o… pic.twitter.com/4u5iJWsln3

In order for trucks to connect to the eHighway, Siemens designed a new extendable power coupler that automatically extends from the top of the vehicle, connecting to the overhead power lines when their presence is detected. When they have to leave the power lines, the trucks switch to electric batteries or diesel power to continue their journey. The coupler can also easily disconnect if a truck needs to overtake a slow vehicle and then quickly reconnect when the truck is back on its electrified lane. According to the Siemens, eHighway is twice as efficient as internal combustion engines, cutting energy consumption and local air pollution.

The 670-Volt direct-current cables are supposed to shut down automatically if severed accidentally, and during winter an anti-icing system should keep them operable. Two other similar tests are underway at Kuppenheim in southern Baden Württemberg and at Lubeck in northern Schleswig Holstein state. 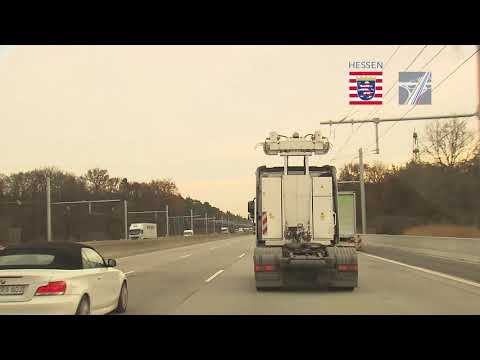 If this $16-million pilot test goes well, Germany hopes to add overhead cables to 1,000 kilometers of the country’s 13,000-kilometer autobahn network. The country has pledged to reduce its CO2 emissions by 80% by 2050 and is considering banning the sale of new gas- and diesel-powered vehicles by 2030.

The test stretch on the German highway is part of the ELISA project (short for electrified, innovative heavy traffic on the Autobahn), and is being coordinated and operated by Hessen Mobil, the federal state’s road transport authority.

“If we want to achieve our climate protection targets by 2030, then that actually means that we have to make progress in this sector,” Schwarzeluehr-Sutter concluded.