The machine uses a high-velocity beam of electrons to cut through virtually any metal at least 15 times faster than any technique.

Metal-cutting hasn’t changed that much in the last 60 years. Though robots are used now, milling and cutting operations have virtually remained the same. Unfortunately, these haven’t kept up with the times – specially, advanced materials like super-strong alloys used by the aviation or oil&gas industry. Since they were in a slump and no one seemed to have come up with a solution, General Electric engineers invented their own next generation cutting tool called Blue Arc. The machine uses a high-velocity beam of electrons to cut through virtually any metal at least 15 times faster than current techniques.

Many types of tool materials, ranging from high carbon steel to ceramics and diamonds, are used as cutting tools in today’s metalworking industry. The problem with machining very strong, very hard materials is that you need a machine head that’s made out of something stronger and harder. That’s why for some time, the machining industry has oriented towards laser and high pressure water cutters instead. Blue Arc not only does the job a lot faster, it also creates better quality parts.

Because the electrons erode material, it does not generate a lot of heat like laser cutters so material deformation is kept to a minimum. Turbines or compressor blades machined with Blue Arc have a smaller stress. The factory floor footprint is also smaller, as the machine generates less waste, dust and other contaminants. GE estimates that it could save $200 million over five years using the technology.

Blue Arc was created in 2011, and now GE is looking for partners to license the technology. The video below showcases how the machine works, as presented by a GE factory engineer. It doesn’t look very impressive, but gets the job done. 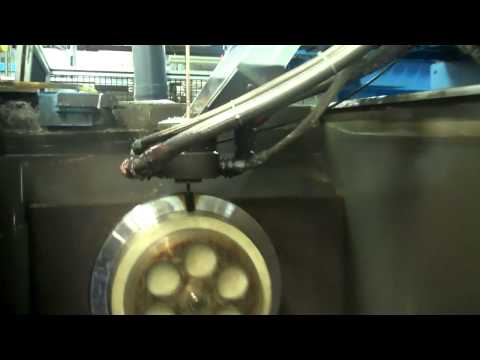