"It's amazing no-one had thought of it before," said one of the scientists involved.

In what can be described as a huge breakthrough in the field, scientists at University of New South Wales, Australia, unveiled a new quantum computer design that promises to overcome many challenges the technology faces today. The elegant novel blueprint uses so-called ‘flip-flop’ qubits that can be integrated on silicon chips — the kind found in everyday electronics — much easier and more reliably than ever thought possible. 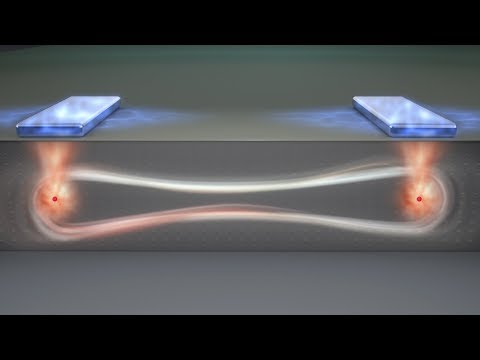 “It’s a brilliant design, and like many such conceptual leaps, it’s amazing no-one had thought of it before,” said in a statement Andrea Morello, Program Manager in UNSW-based ARC Centre of Excellence for Quantum Computation and Communication Technology (CQC2T).

The crux of the UNSW innovation lies in the ‘flip-flop’ qubit which uses both the electron and the nucleus of the atom, in this case, the phosphorus atom.

A qubit is the quantum analog of the digital bit that encodes information in 1s and 0s. The crucial difference is that a quantum bit can exist in both states at the same time due to a quantum quirk called superposition.

It’s akin to saying a switch is both on and off at the same time or that water is flowing and not flowing through a pipe simultaneously — which in day to day life makes absolutely no sense, but in the quantum domain, few things are reasonable.

Two-qubits can perform operations on four values, three on eight values and so on in powers of two. Today’s computers have millions of transistors. Now imagine a quantum logic gate that works with millions of qubits. The computing force would be unheard of.

To problem is designing a quantum computer whose qubits don’t fail due to decoherence is extremely challenging. Some companies like D-Wave or Google, as well as many academic research groups, are investing heavily to build a working quantum computer but the consensus is there’s no such thing yet.

Some attempts proved successful though in making qubits ‘talk’ to each other. The issue lies in the fact that these require exotic methods and materials.

For instance, ion traps and so-called optical tweezers are typically used to cool down atoms close to absolute zero, thus almost grinding to a halt the atomic motion. This allows scientists to read quantum states but the drawback is these systems can’t be feasibly scaled to more than a couple hundred qubits. It’s a problem of space and we eventually want millions of qubits.

Crafting quantum logic gates with silicon is also essential since the this the de facto material of choice in any major semiconductor application. You want to exploit the existing mammoth infrastructure, not start from scratch. Quantum computers need not be electric cars.

Electrons have both a charge and spin. It’s the spin which determines if an atom can generate a magnetic field and it’s the spin that can be used as a qubit where 0 and 1 correspond to spin-up and spin-down quantum states, respectively.

To avoid massive decoherence previous quantum systems required spacing qubits at a distance of only 10-20 nanometers, or just 50 atoms apart.

“If they’re too close, or too far apart, the ‘entanglement’ between quantum bits – which is what makes quantum computers so special – doesn’t occur,” said lead author Guilherme Tosi, a Research Fellow at CQC2T.

In this novel quantum design, a silicon chip is covered with a layer of insulating silicon oxide, over which a pattern of metallic electrodes operate at temperatures near absolute zero and in the presence of a very strong magnetic field.

The approach developed by Tosi and colleagues essentially led to a new kind of qubit where a qubit ‘0’ state is defined when the spin of a phosphorus electron is down and the nucleus spin is up, while the ‘1’ state is when the electron spin is up, and the nuclear spin is down. Hence, the ‘flip-flop qubit’ designation as reported in Nature Communications.

The main consequence is that qubits can now be controlled by electrical signals, which are “significantly easier to distribute and localize within an electronic chip” than magnetic ones.

“Our new silicon-based approach sits right at the sweet spot,” said Morello. “It’s easier to fabricate than atomic-scale devices, but still allows us to place a million qubits on a square millimetre.”

“This means we can now place the single-atom qubits much further apart than previously thought possible,” he continued. “So there is plenty of space to intersperse the key classical components such as interconnects, control electrodes and readout devices, while retaining the precise atom-like nature of the quantum bit.”

It’s important to note that all of this is a theoretical framework, a blueprint and such a device as described by Morello and Tosi doesn’t exist yet.

This visionary roadmap, however, has the potential to finally launch humanity in the space race of the 21st century. With millions of times the computing power we have today, numerous fields of science will be able to make quantum leaps. We will be able to model the climate in unprecedented detail leading to better adaptation measures. We’ll be able to test thousands of molecules and find new treatments or cures for some of the most debilitating diseases still haunting mankind. Finance, aerospace, transportation, these are just a couple out of the plethora of industries destined to become disrupted by quantum computers.