This amazing insect doesn't flinch at the thought of getting eaten. It pops!

Once a prey is swallowed, it’s typically done for — but not this insect, as one toad has come to learn the hard way.

Bombardier beetles — tribes Brachinini, Paussini, Ozaenini, and Metriini, comprising more than 500 species altogether — are some of the most successful insects out there. They live on every continent on the planet, except Antarctica, and have virtually no natural predators. The name comes from the beetles’ remarkable explosive defense system, in which a volatile liquid is ejected from the anus with an audible popping sound.

Inside the bombardier’s abdomen lies a blast chamber where two chemicals, hydrogen peroxide and hydroquinones, react to form a superheated spray called benzoquinone. These two chemicals sit idly most of the time, but when the bug feels threatened it releases a catalyst that sets off the benzoquinone reaction.

“You’ve got 100 degrees centigrade temperature, you’ve got a chemical burn, the steam comes off like a smoke, and then also the reaction kind of hisses,” said entomologist Terry Erwin of the Smithsonian Institute.

“There might be 200 of these beetles under one rock, and they all fire at the same time, and you’ve got a smokescreen, or vaporscreen, as it were,” Erwin said.

This mixture explodes from the beetle’s hind like a lawn spray instead of a streamlined jet, spewing the boiling chemicals in virtually all directions at a rate of 500 to 1000 squirts/second. The heat is enough to kill smaller threats like insects and can scare away anything bigger, from amphibians to humans. Even when it literally gets eaten, the beetles’ spray can still work, as Japanese researchers recently showed.

There had been anecdotal reports of toads spitting out bombardier beetles, but biologists at Kobe University wanted to see it for themselves and document the whole process. They fed bombardier beetles (Pheropsophus jessoensis) to two different species of toads native to the forests of central Japan. One species shared its natural habitat with bombardier beetles, while the other toad was very unlikely to encounter the insect in the wild.

After each toad ingested a beetle, researchers could hear a cracking noise, indicating the insect had opened fire.

Overall, 43 percent of the toads ultimately vomited the beetles, anytime between 12 to 107 minutes after swallowing the insect, which the Japanese call “the farting bug.” All 16 toads involved in the experiment survived. Remarkably, that went for the beetles too — after being expelled from the toad’s stomach, every evicted beetle was still alive, and all but one survived for at least another two weeks.

Interestingly, only 35 percent of the toads that shared a habitat with the beetle coughed them up, compared to 57 percent of toads that didn’t have them as habitat buddies. This suggests that the former kind of toads have adapted to the beetles’ chemicals through regular exposure, the authors reported in the journal Biology Letters

Size matters, too. Larger beetles escaped more frequently than their smaller peers, and small toads were more likely to vomit the insects than larger toads. This makes sense, since a larger beetle can produce more spray, and a smaller toad has less stomach mucus to handle the scalding cocktail.

Scientists aren’t yet sure how the beetle manages to survive — sometimes for over an hour — inside the toad’s stomach. It could be that its poison prevents the toad from producing enough digestive juices or the beetle itself has some sort of resistance to the digestive fluid and enzymes.

What’s certain is that the bombardier beetle is one of the most amazing creatures in the animal kingdom. It might also teach us a trick or two. Researchers at MIT are closely following the beetle and hope their work might lead to better blast protection systems, or even the creation of new types of propulsion systems. 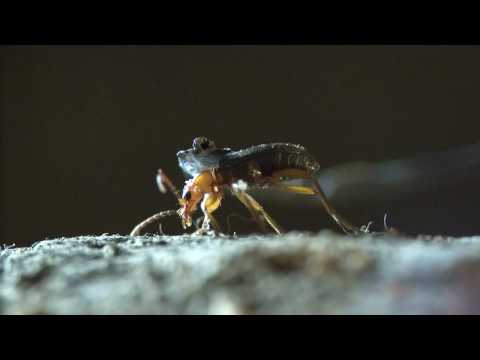